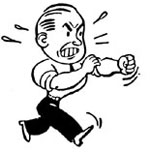 Embattled pharmaceutical executive Martin Shkreli is trying hard to give the people what they want — a chance to punch him in the face (Associated Press, Sept. 28). The founder of Turing Pharmaceuticals, Shkreli, 33, resigned his position as the company’s CEO last year after he came under fire for jacking up the price of a lifesaving malaria medication by 5,000 percent. Also the cofounder of the hedge fund MSMB Capital Management, Shkreli was indicted in 2015 on federal charges of defrauding potential investors. So Shkreli offered to the highest bidder on eBay the chance to hit him in the face, the money raised allegedly going to the son of his PR consultant, Mike Kulich, who died following a battle with cancer. After the online auction site removed his listing, Shkreli said those who contribute to an online fundraiser would be entered in a raffle to punch or slap him — though he’s also open to getting dinner with the winner instead.

A ponytailed dwarf has been arrested on suspicion of leaving a homemade bomb outside a police station in a small Colorado town (Daily Mail, Oct. 18). David Michael Ansberry, 64, of San Rafael, California, was apprehended after he was caught on surveillance video buying cellphones that were used to try to trigger the explosive device in the town of Nederland. He was easily recognizable because he is three-and-a-half-feet tall, weighs 100 pounds, wears a ponytail and baseball cap, and uses crutches. Ansberry has been linked to a radical hippie group known as STP, or the STP Family, which was reportedly once based in the Colorado mountains and is known to be violent. Sources say Ansberry may have been seeking revenge for something that happened more than 40 years ago. The bomb scare rattled the mountain-ringed town of 1,500 people, an artists’ refuge that has long thrived on its embrace of outsiders.

In the lead-up to last month’s presidential election, a Minnesota company was offering a unique service to jaded Americans: tank rides in which customers could crush mannequins that look like Donald Trump or Hillary Clinton. Drive A Tank, located in Kasota, normally offers people a chance to demolish an old car with a tank for $649. But for an additional $249, they offered to throw a Clinton or Trump dummy into the vehicle. Those who couldn’t choose between the two could run over both for $399. Drive A Tank owner Tony Borglum created the “Can-dud-date” package because he believes many Americans were dissatisfied with both Trump and Clinton. By mid-October, Trump supporters led the tank-driving demographic. Only two people had ordered the election upcharge, and both chose to demolish the Clinton dummy (Huffington Post, Oct. 13).

Lethal Literalism... The Alligators Are Alright... Holy Autographs... Five Boys in Two Years... The Power of Toys... Dumpster-Diving 2.0... The Body as Billboard... So You Want to Be a Working Girl?... Buyer Beware... To Live & Die in Guangdong Province... Marriage Briefs... Underpants for God's Anointed