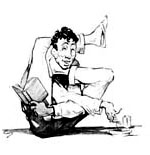 A new political action committee has a message for straight white men considering running for office: Don’t. According to its website, the Colorado-based Can You Not PAC “was started by white men, for white men, asking white men that one important question: ‘Bruh, can you not?'” The PAC initially started out as a joke, but after raising $1,200 in its first 24 hours, founders Jack Teter, a 25-year-old activist, and 26-year-old Kyle Huelsman are assembling an advisory board of non-straight white guys to pick candidates worthy of its support. Or as the site puts it, “We are raising money with the intent of defeating mediocre white dudes and elevating some of the best underrepresented candidates of 2016.” The PAC has already met with significant backlash, a lot of it directed at Teter, who is transsexual. “People are accusing me of becoming a man to blow up the white male stratosphere,” said Teter. Can You Not PAC functions in part as an answer to a conundrum Teter says she faces: “Figuring out how to continue being a feminist now that I’m a man” (MSNBC, May 4).

This May, Peruvian actor Richard Torres “married” Mexico’s famous 1,000-year-old Arbol del Tule, or Tule Tree, in an Incan ceremony replete with incense, grains, and conch shells (Fox News Latino, May 10). The ritual took place in the presence of dozens of environmentalists and inhabitants of the Oaxacan town of Santa María del Tule, most of whom had no idea why the man was kissing and “marrying” the tree, a type of cypress whose trunk has the largest diameter in the world. Torres’s wedding was part of the “Marry a Tree, Save Your Oxygen” project, whose mission is to stop deforestation around the world. “Stop the hand that cuts down trees,” Torres said during the ceremony. “I condemn this genocide [of trees] and ask the president of Mexico to halt the destruction.”

Two teenagers visiting the San Francisco Museum of Modern Art were less than impressed by some of the exhibits, one of which featured two stuffed animals on a blanket. “Is this really what you call art?” asked Kevin Nguyen, 16, of San Jose. TJ Khayatan, 17, added, “We looked at it and we were like, ‘This is pretty easy. We could make this ourselves.'” Thus, a scheme was hatched: They placed a pair of eyeglasses on the floor and stood back and watched as, within minutes, visitors regarded their prank as a bona fide work of art, with some even taking photos of the fake installation (The New York Times, May 30). News sites like The Huffington Post and NBC Bay Area reported on the episode after TJ posted photos on Twitter, which went viral. In response, the museum tweeted, “Do we have a Marcel Duchamp in our midst?” referring to Fountain, a urinal the French artist turned on its side and put on a pedestal, one of the works he used to challenge traditional notions of making and exhibiting art.

The News You May Have Missed: January-February 2021

Defund for Thee, but Not for Me... Pork Policy... Waste Water into Waste Wine... Scorpion King... Office Pajama Party... and more