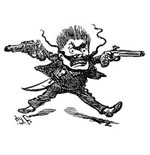 Hundreds of couples packed a Unification Sanctuary Church in the Pocono Mountains about 100 miles north of Philadelphia for a blessing of their marriages and their AR-15 and AK-47 semi-automatic rifles (The Mirror, Mar. 5). The women wore white, and the men dark suits, and many wore crowns — some made of bullets — as they hailed the “rods of iron” they had brought. Students from a nearby elementary school were relocated for the day to distance them from the gun-toting couples. The ceremony took place two weeks after gunman Nickolas Cruz, 19, stormed a high school in Florida and opened fire on staff and students, killing 17. A spokesman for the church, now headed by Rev. Hyung Jin Moon after the death of his father, Rev. Sun Myung Moon, said the ceremony had been planned long before the Florida shooting. “Each of us is called to use the power of the ‘rod of iron’ not to harm or oppress as has been done in Satanic kingdoms of this world, but to protect God’s children,” he said, citing the Book of Revelation.

A high-school teacher in Seaside, California, accidentally fired a pistol while lecturing about public safety in a classroom (USA Today, Mar. 14). Dennis Alexander, who also serves as a reserve police officer and city councilman, was pointing the gun at the ceiling when he inadvertently fired it during his Administration of Justice class. One student suffered a non-serious injury to his neck from either bullet fragments or debris falling from the ceiling. The Monterey Peninsula Unified School District prohibits anyone besides school resource officers from carrying guns or other weapons on campus, and police and school administrators are investigating whether Alexander was legally allowed to bring a gun to school. The incident comes amid a national debate about whether teachers should be armed on campuses.

An autonomous car operated by Uber struck and killed a woman in Tempe, Arizona, in what is believed to be the first pedestrian death associated with self-driving technology (New York Times, Mar. 19). The car, a Volvo XC90 sport utility vehicle outfitted with Uber’s sensing system, was in autonomous mode with a human driver at the wheel but carrying no passengers when it struck the 49-year-old woman, who was walking her bicycle on the street. The vehicle was moving around 40 miles per hour, and it does not appear that it slowed down before impact. Uber quickly suspended testing in Tempe, as well as in Pittsburgh, San Francisco, and Toronto. In 2015 Arizona officials declared the state a regulation-free zone in order to attract testing operations from companies like Uber, Waymo, and Lyft. The companies insisted that autonomous cars would be safer than regular cars because they take easily distracted humans out of the driving equation.