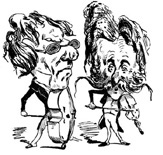 “You have conquered, and I yield,” admits William Wilson’s doppelgänger to the protagonist of the eponymous Edgar Allan Poe short story. “Yet, henceforward art thou also dead — dead to the World, to Heaven and to Hope! In me didst thou exist — and, in my death, see by this image, which is thine own, how utterly thou hast murdered thyself.” After years of being dogged by a lookalike who attempts to thwart his every sin, William Wilson stabs to death this lifelong rival whom he calls “scoundrel! impostor! accursed villain!” The rival has pursued him from his school days on to university and into his adulthood travels throughout Europe and Egypt. But William Wilson’s doppelgänger, who looks and dresses exactly as Wilson himself, is no mere stalker; rather, Poe uses the doppelgänger motif as a physical manifestation of Wilson’s conscience and ultimately shows the demise of a man who, blinded by his sins, kills his own conscience.

The troubled Poe explored the concepts of conscience, guilt, remorse, and the consequences of sin in several of his short stories, most famously perhaps in “The Tell-Tale Heart,” the brief and simple narrative of a man’s guilty conscience leading him to confess that he’s killed a man and buried his body beneath his floorboards. The man turns himself in to the authorities, if only to stop the panic caused by his accusing conscience. The protagonist in Poe’s “William Wilson” takes another path: He spends his life running from his conscience and its counsels to stick to the straight and narrow. Wilson himself narrates the story in retrospect, setting down his account as a kind of oblique cautionary tale and a plea for sympathy from his fellow man as he nears the grave. The ultimate message: You disregard your conscience at your own peril.

Born into a 19th-century noble English family, Wilson’s “weak-minded” parents could do little to check the evil propensities of his childhood years. Some “feeble and ill-directed efforts” result in complete failure on their part and a total triumph for him. “At an age when few children have abandoned their leading strings, I was left to the guidance of my own will,” admits Wilson, “and became, in all but name, the master of my own action.” Even before he enters school, Wilson grows self-willed, addicted to the wildest caprices, and prey to the most ungovernable passions — a true problem child with little regard for anyone but himself.

Some individuals freely give themselves to evil. Notice that Our Lord did not exorcise Judas, nor did St. Peter exorcise Ananias, nor St. Paul Elymas.