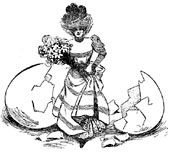 By Edmund B. Miller | November 2019
Edmund B. Miller teaches at Father Gabriel Richard High School in Ann Arbor, Michigan, and is President of Guadalupe Workers, a sidewalk-counseling ministry in Detroit.

“Everything That Rises Must Converge.” By Flannery O’Connor.

Everyone has heard of the indecisiveness of Hamlet. But perhaps they haven’t heard that his indecisiveness is not the point at all of Shakespeare’s famous play. Indecisiveness to the contrary, Hamlet plots out a clever trap for his uncle, the “Mousetrap” play, and he engineers rather vicious deaths for Rosencrantz and Guildenstern. These are intellectually engineered plots, however, and require no direct physical action by Hamlet. When he does act physically, as when he stabs Polonius through an arras, it is action without thought, a deed directed by unthinking impulse. Hamlet’s problem, then, is not indecisiveness; his problem is the separation of his self between mind and matter — the mind, influenced by his ghost father, who feeds Hamlet’s repulsion to the “damned incest” of his mother’s marriage; and matter, the stuff of his other father, King Claudius, who spends his evenings at drink and kills to obtain power.

To back up and give a larger context to our discussion, the mind/matter problem in O’Connor’s work is not, strictly, the manifestation of dualism. Although from the human perspective, mind and matter are considered dualities, from the eternal perspective they exist in the same dimension, that of time. O’Connor, whose decade-long struggle with lupus kept her on the portal between life and death, and who lived devotedly the sacramental life, casts a perceptive eye on time, but she does so from the eternal perspective. From there she sees man’s fragmented, time-constricted efforts to find meaning in and through the stuff of creation — in his own intellect, his own good blood, his power to move, change, and produce, as well as his ability to control.

“Everything That Rises” is the flagship story of the collected volume of short stories under the same name. All of them, through various characters and situations, deal with the fragmented, incomplete vision of man. “A View of the Woods” gives us an 80-year-old grandfather whose long years, instead of granting him wisdom and perspective, have served only to entrench him in the ways of time. His name is Fortune; he believes in progress and that the motions of time and change will bring, inevitably, salvation to man. He is opposed by his granddaughter, who fights with him to stop the sale of a piece of land — land that offers her and her family a view of the woods on the other side of the street. Here the woods function as something like oceans and seas in more ancient literature. They are dark and mysterious, hinting of death and perhaps something beyond death. “All there is to see, I see,” Queen Gertrude tells Hamlet — which is exactly the problem. He who does not see the ghosts among us, who believes that the extent of reality is found within the stuff of time, lives a life of incomplete reckoning.