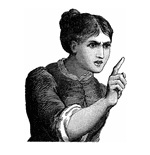 Women’s Revenge: To Torture Without Guilt

BATTLE STRATEGIES OF THE SEXES

By Alice von Hildebrand | February 2009
Alice von Hildebrand, a Contributing Editor of the NOR, is Professor Emerita of Philosophy at Hunter College of the City University of New York. She is the author, most recently, of The Soul of a Lion (Ignatius Press; Preface by Joseph Cardinal Ratzinger), about her late husband, the Catholic philosopher Dietrich von Hildebrand; The Privilege of Being a Woman (Sapientia Press); and By Love Refined (Sophia Institute Press). She has written extensively for many Catholic periodicals and appears frequently on Mother Angelica's EWTN.

Much has been written about men’s brutality toward women. That any abuse of physical strength is despicable and should be radically condemned need not be mentioned. It is revolting when the strong abuse the weak. The question I wish to briefly address is: Are there not other ways of “torturing” people when physical violence is out of the question? To be more precise, are there not ways in which “weak” women take their revenge?

Just as literature offers a rich array of men’s unpardonable violence toward women, it also offers many examples highlighting the fact that, in very subtle ways, men can be victimized by the fair sex.

Tragically enough, many a man marries a girl based on what is crudely called her “sex appeal.” Due to their immaturity, these men confuse pure physical attraction with love, and then discover that a valid foundation for a happy marriage is totally lacking. Their “union” was based on sand.

Today, thanks to our liberal politicians, there is an easy solution at hand: no-fault divorce. But for centuries in societies still marked by Christian tradition, divorce was unacceptable. Husband and wife remained together “until death do them part,” even though the spouses were ill matched and profoundly unhappy.

"Money is power." And, boy, do these feminists want money.

Review of God or Goddess? Feminist Theology: What Is It? Where Does It Lead?