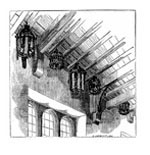 Death Comes for the Archbishop.
By Willa Cather.

Although I have been an educator for many years, I wonder how long I can continue. It has nothing to do with age. It has to do with the simple fact that students aren’t buying what I’m offering. I learned my Latin long ago, and in so doing I learned that education has to do with the verb ducere, to lead, or e ducere, to lead out. Accordingly, I have not sought to empower my students, to motivate them, to equip them, to form them, or any of that coffee-mug stuff. Primarily, I have sought to show them: to show them the harmonies, the patterns, the artistry of themselves and creation, and the artistry of God’s final plan.

The overall scenario is the same as that found in Christopher Marlowe’s 16th-century play The Tragical History of the Life and Death of Doctor Faustus. Neither Mephistopheles nor Lucifer engages in extended argument with Faustus; they simply redirect his gaze. When Faustus beholds the heavens, when he sees that manifestation of the ordering mind of God, he longs to repent. Yet when he remembers the harp of Amphion, the notion of repentance vanishes. And when he asks Mephistopheles who made the heavens, Lucifer distracts him with a parade of the seven deadly sins. And so it goes with most of my students. As awe draws them out, evil shows them a new online game or iPhone update.

What does the world train my students to see? Dots. The educational system gives them “information,” isolated units of knowledge, which, because they are isolated, are ultimately pointless. Apple, Google, and the like give them flickering screens, which my students navigate with incredible dexterity, fragmenting their minds with image after unrelated image. The film industry does its part by never demanding too much focus from the audience: scenes must change rapidly, and action must be intense.

When Thomas Hardy’s "Jude the Obscure" was published, Victorian England was hardly ready to accept that novel’s story of a love affair between cousins.