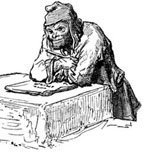 DISCIPLES OF JAQUES, NOT JESUS

Students of literature and readers of Shakespeare recall the famous passage from As You Like It (II.vii) that depicts the seven ages of man. According to the pessimistic Jaques, every age is afflicted with the melancholy that defines the human condition. In Jaques’s view human life is repetitious, tedious, and predictable, lacking in adventure, romance, and mystery:

All the world’s a stage,

And all the men and women merely players:

They have their exits and their entrances;

And one man in his time plays many parts,

His acts being seven ages. At first the infant,

Mewling and puking in his nurse’s arms.

And then the whining schoolboy, with his satchel

Unwillingly to school. And then the lover,

Made to his mistress’ eyebrow. Then a soldier,

Full of strange oaths and bearded like the pard,

Jealous in honour, sudden and quick in quarrel,

Even in the cannon’s mouth. And then the justice,

In fair round belly with good capon lined,

With eyes severe and beard of formal cut,

And so he plays his part. The sixth age slips

Into the lean and slipper’d pantaloon,

With spectacles on nose and pouch on side,

His youthful hose, well saved, a world too wide

For his shrunk shank; and his big manly voice,

And whistles in his sound. Last scene of all,

That ends this strange eventful history,

Is second childishness and mere oblivion,

But this famously morose speech occurs in a play that is more full of wonder than of melancholy. In As You Like It (as also notably in The Winter’s Tale) Shakespeare portrays life not as a series of sad occasions but as a sequence of events that constantly renew the human spirit and rejuvenate the world through the wonder of love, the magic of luck, and the mirth of laughter. Jaques considers love “woeful,” but the lovers in the play, Orlando and Rosalind, exude mirth, wit, playfulness, and joy. Although Jaques characterizes old age as dullness and decline, the older characters in the play are robust and vigorous, the old servant Adam representing “the constant service of the antique world,” and Duke Senior epitomizing a man in love with life who practices hospitality and cherishes friendship. In short, Shakespeare counters Jaques’s sour Siren song by showing an intrinsic goodness in each phase of human life.

The truly human needs are the very things not absolutely necessary for mere survival: dignity, respect, gratitude, and kindness.

For the original vampire slayers, most of them nominal Anglicans, the efficacy of Catholic sacramentals and the Sacrament quickly becomes apparent.