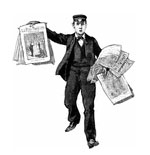 Greek Orthodox and Armenian priests attacked one another with brooms inside the Church of the Nativity as their long-standing rivalry erupted in violence during holiday cleaning on the day after Christmas. The basilica, built over the grotto in Bethlehem where Jesus was born, is administered jointly by Roman Catholic, Greek Orthodox, and Armenian Apostolic authorities. The clean-up turned ugly after some of the Greek Orthodox faithful stepped inside the Armenians’ section, touching off a scuffle between about 50 Greek Orthodox and 30 Armenians, all wielding cleaning implements such as brushes and brooms. Palestinian police, armed with batons and shields, quickly formed a human cordon to separate the two sides so the cleaning could continue (Associated Press, Dec. 27, 2007).

A small-time Indian baba was hospitalized after two men cut off his “magical” right leg and ran off with it. Yanadi Kon­daiah, 80, claimed that those who touched his leg would be cured of illness or have wishes granted. But the Hindu sooth­sayer’s shtick appears to have backfired, as two strangers plied him with alcohol, then cut off his leg from the knee with a sickle. Kondaiah was then left alone, bleeding heavily, until he was found by passing villagers and taken to the hospital. He said that he did not understand the motive of the men in taking away his leg. “I have always been good to others and helped whoever came to me,” Kondaiah said. “Then why has this been done to me?” (The Australian, Dec. 14, 2007).

Dozens of residents of a mobile home park near Green Bay, Wisc., are convinced they witnessed a miracle. According to Victor Timayo, images of the Virgin Mary started showing up on his television screen during prime time, around 9:30 PM. “We was watching the program and just the TV froze, and it started appearing some images there, the Virgin Mary and another Virgin of Guadalupe and others,” he explained to WBAY-TV (Dec. 18, 2007). The unexplained images then began appearing in the corners and lower middle parts of the television picture, fading in and out for the next three hours. At 1:00 AM the images vanished, the television picture broke up, and regular programming resumed.

Gillian Gibbons, a British schoolteacher in Sudan, was sentenced to 15 days in jail for allowing her students to name a teddy bear “Muhammad.” She was also deported to England for “insulting Islam.” Under Sudan’s Sharia law, teddies may not bear the same name as Islam’s revered prophet, a small point that Gibbons claims not to have known at the time. The case so inflamed passions among many in Khartoum that demonstrators called for Gibbons to be put to death. One protestor said, “If I find this British woman, I will behead her myself” (Melbourne Herald-Sun, Dec. 10, 2007).