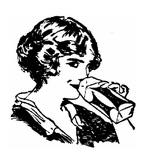 A robot “priest” that gives automated blessings has been unveiled in Wittenberg, the German town made famous by Martin Luther, as part of an exhibition marking the 500th anniversary of the start of the Reformation (The Mirror, May 30). The robot, called “BlessU-2,” was developed by the Evangelical Church in Hesse and Nassau and consists of a metal box with a touch screen, two arms, and a head with eyes and a digital mouth. Users can choose blessings in German, English, French, Spanish, or Polish. After the robot wishes users a “warm welcome,” it asks if they want to be blessed by a male or female voice. BlessU-2 then raises its arms to the heavens and starts to smile. Lights flash in its arms as it says, “God bless and protect you,” and recites a Bible verse. Spokesman Sebastian von Gehren said that reactions have varied wildly. “One half thinks it’s great” while “the other cannot imagine a blessing from a machine.” A backup robot is available in the event of a breakdown.

Italian fashion house Dolce & Gabbana (D&G) has responded to criticism of its support for First Lady Melania Trump by boycotting itself. D&G rolled out a line of $245 “Boycott D&G” T-shirts clearly meant to flout the objections of those who have called for a boycott of the luxury fashion label. The politically incorrect fashion giant also released a video, filled with young models wearing the T-shirts and waving banners at a fake protest. D&G’s founders, designers Domenico Dolce and Stefano Gabbana, both appear in the video, pretending to “lead” the protest and give interviews. Outrage over their controversial statements is nothing new. In 2015 Elton John called for a boycott after the designers told Italian magazine Panorama that they opposed gay adoptions. “The only family is the traditional one,” the fashion duo said. “No chemical offsprings and rented uterus: Life has a natural flow, there are things that should not be changed” (Washington Post, June 14).

A 22-year-old woman from Mexico’s Tarahumara indigenous community won a 50-kilometer ultramarathon — while wearing sandals (BBC News, May 23). María Lorena Ramírez defeated 500 other runners from 12 countries in the female category of the Ultra Trail Cerro Rojo in Puebla, Mexico. She ran without any professional gear; her sandals were reportedly made from recycled tire rubber. Ramírez also wore a skirt and a scarf in the race. She did not have any professional training, though the Tarahumara are known for being excellent runners. They live in widely dispersed settlements, covering extremely long distances to visit neighboring villages, hunt, and trade. To stay hydrated, they consume large amounts of corn beer, which is high in carbohydrates. Reports said Ramírez’s job is herding goats and cattle, and she walks some 10 to 15 kilometers every day. She finished the ultramarathon in seven hours and three minutes, and was awarded 6,000 pesos (approx. $320).

The News You May Have Missed: November 2020