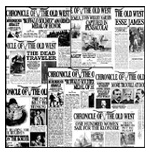 Have you ever wanted to smell just like Pope Pius IX? Well, now you can. At least that’s what Excelsis Fine Fragrances of San Rafael, California, claims. Their product, known as “The Pope’s Cologne,” is available for mail order for just $25 per bottle (plus an additional $4.95 shipping and handling). Described as a “classic Old World cologne made from the private formula of Pope Pius IX (1792-1878),” it was obtained from the descendants of the commander of his Papal Guard and lifelong friend, General Charles Charette. So, what did Pio Nono smell like? Judging from the promotional literature for The Pope’s Cologne, he smelled surprisingly fresh with “notes of violet and citrus.” Fortunately, the Holy Father did not wear Eticuera Cologne (another fragrance produced by Excelsis), which smells of “earthy creekside” and “summer pasture.”

For the past 33 years, the town of Juchitan on Mexico’s Pacific coast has played host to the Festival of the Muxes, the local name for indigenous gays and transvestites. This year the muxes (pronounced “moo-shes”), mostly of ethnic Zapotec descent, were blessed by the local Catholic priest before heading to the dance and parade that crowns a transvestite queen and celebrates the harvest. According to Reuters (Nov. 23, 2008), some of the muxes dress as women year round and others are homosexuals who only don women’s clothes at the annual party. Local theater director Sergio Santamaria says Juchitan has long happily accepted homosexual culture: “The legend here is that mothers pray for a gay son who can take care of them when they are old.”

According to the U.S.-based head of Good News India, a Christian organization that runs several orphanages in Orissa, one of India’s poorest regions, Christian leaders who are being targeted by Hindu militants carry a price on their heads. A spokesman for the All India Christian Council said, “People are being offered rewards to kill and to destroy churches and Christian properties. They are being offered foreign liquor, chicken, and mutton. They are given petrol and kerosene” (Fox News, Nov. 20).

Writing in his political blog, Ryszard Czarnecki, a member of the Polish parliament, quoted Poland’s Foreign Minister Radek Sikorski as saying, “Have you heard that Obama may have a Polish connection? His grandfather ate a Polish missionary.” A spokesman for the Polish foreign office conceded that Sikorski had cracked the controversial joke, but denied that the foreign minister had intended to insult Obama, whose father was Kenyan (Telegraph, Nov. 18).