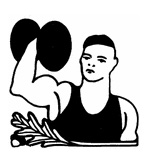 If you ever wondered how you might build your muscles while building your faith, author Michael Carrera says he’s got the solution: praying the rosary with resistance-training exercises. Pump while you pray — or is it pray while you pump? Carrera, a personal trainer from Toronto, recently released a book titled The Catholic Workout. With the help of basic dumb­bells, The Catholic Workout takes readers through five specific resistance exercises while meditating on the events of the Passion of Christ. “There are a lot of people out there who, like me, want to include prayer and fitness into their lives, but seem to struggle,” said Carrera. “Combining faith and fitness into a short routine is a practical and purposeful way of creating balance of mind, body and spirit and in opening ourselves to the Lord.”

In the wake of the sex-abuse scandals, Belgian Catholics in record numbers are turning to apostasy — formally breaking with their religion through a process of de-baptism. “It has increased enormously since the cases of child abuse. It keeps going up,” said Bjorn Siffer, deputy director of the Flemish Humanist-Secular Society. “We know from the bishops’ secretaries that they can’t cope with all the requests they are getting for de-baptism.” Siffer says 80 people ditched Catholicism during a single “de-baptism day” in Antwerp in June. A similar number dropped out of the Church in an event earlier this year in the western city of Kortrijk. A secular organization in Belgium’s French-speaking south says 869 people have used its help to sever links with the Church so far this year, compared to 380 for the whole of 2009, and just 66 two years ago (BBC News, Sept. 17).

Guy Consolmagno, a trained astronomer and planetary scientist at the Vatican’s observatory, discussed a slew of topics at the British Science Festival in Birmingham, England, this September, noting that the Vatican was more up to date with the latest scientific developments than most realize. “You’d be surprised,” he told London’s Guardian (Sept. 21). Though he conceded the odds of finding and communicating with other intelligent life is essentially zero, Consolmagno said he would welcome the event. “Any entity — no matter how many tentacles it has — has a soul,” he said. Asked whether or not he’d baptize an alien, Consolmagno replied: “Only if they asked.” Although he was not asked if he’d baptize dogs, cats, or boll weevils (by his criteria, they all have souls), one presumes he would — if they asked.

An ice cream advertisement featuring a pregnant nun was banned by watchdogs on the eve of the Pope’s visit to Britain in September. A magazine ad for Antonio Federici ice cream showed a heavily pregnant nun standing in a church holding a tub of ice cream in one hand and a spoon in the other. The text read: “Immaculately Con­ceived…Ice cream is our religion.” Britain’s Advertising Standards Authority received complaints from people who felt it was offensive to Christians, particularly to those who practice Catholicism. The manufacturer said it wanted to highlight how serious it was about producing a high-quality product. However, it also told the watchdog that the imagery stemmed from its wish to “comment on and question, using satire and gentle humor, the relevance and hypocrisy of religion and the attitudes of the church to social issues” (Daily Mail, Sept. 15).

Atheist celebrity Christopher Hitchens, who is in the active stages of dying from cancer, doesn’t plan on any kind of deathbed conversion. Hitchens, who recently had to cancel a promotional tour for his newest book, Hitch-22: A Memoir, declined to participate in the informally declared “Everybody Pray for Hitchens Day” on September 20. The way Hitchens sees it, the people praying for him break down into three basic groups: those who seem genuinely glad he’s suffering and dying from cancer; those who want him to become a believer in their religious faith; and those who are asking God to heal him. Hitchens said he has no use for that first group. “‘To hell with you’ is the response to the ones who pray for me to go to hell,” Hitchens told the Associated Press (Sept. 20). He ruled out the idea of a deathbed change of heart: “‘Thanks but no thanks’ is the reply to those who want me to convert and recognize a divinity or deity.” It’s that third group — people who are asking God for his healing — that caused Hitchens to choose his words more carefully than normal. Are those prayers OK? Are they helpful? “I say it’s fine by me,” said the dying atheist.