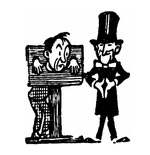 The California Department of Corrections has announced that inmates in the state’s 33 prisons may “marry” their same-sex lovers, effective immediately (LifeSiteNews.com, Sept. 4). Admitting that this may require some creative interpretation of state code regulating marriages of inmates, M.D. Stainer, director of the Division of Adult Institutions, wrote that “the terms ‘bride’ and ‘groom’… shall be interpreted to be gender neutral where necessary (i.e. ‘bride’ may be a male and ‘groom’ may be a female in a same sex marriage).” The only catch? At least for now, due to “security concerns and other legitimate penological interests,” two currently incarcerated prisoners cannot marry each other. Anyone lucky enough to have found love within the prison walls will have to wait until at least one of them is released in order to officially tie the knot.

An Anglican vicar has stopped serving wine during communion because of the growing number of alcoholics in his congregation (Telegraph, Sept. 13). Rev. Paul Filmer, 55, of St. Peter and St. Paul Church in Yalding, Kent, says he doesn’t want the “four or five” alcoholics who attend his church to feel isolated during his services. So he switched to grape juice instead of red wine for everyone, deciding against using separate wine and non-wine chalices for his 70-strong congregation: “There is the argument that Jesus used wine to deliver his communion, but my faith tells me that if Jesus was here he would want to make everybody feel welcome.”

Fads come and go, even in the realm of pregnancy and childbirth. According to Today.com (Sept. 23), placenta prints are a growing trend. “Parents create an artistic representation of the organ which sustained their child — most people refer to this image as ‘the Tree of Life,’ because the veins and the umbilical cord look just like a tree,” explained Jada Shapiro, co-founder of Birth Day Presence in Brooklyn. An artist presses the veiny side of the placenta onto pre-stretched canvas or acid-free art paper. “I photographed a birth a few years ago where the parents had four small canvases waiting and soon after the placenta came out the father pressed the canvasses onto different parts of the placenta to create a multi-part wall hanging for their son’s room.”

New Jersey’s highest court ruled that a municipal judge cannot continue to spend his days on the bench and his nights as a stand-up comedian (Reuters, Sept. 19). Vince Sicari was a judge in South Hackensack, where he worked part-time, ruling on traffic violations and other minor legal matters. Vince August, his alter ego, is a comic and television actor. The 30-page opinion told Sicari to choose one career. “The concern is whether an ordinary member of the public can divorce the comedy routine or the roles played by Vince August from Judge Sicari,” the court wrote. A few hours after the court ruled, Sicari, 44, said he accepted the decision and would resign from the bench immediately. His lawyer said Sicari, who earned $13,000 a year as a judge, relies on his comedy for a full-time income and health benefits.