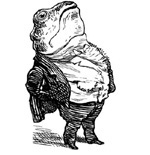 A year-end student art show at Penn State University’s Abington campus featured a sculpture called “Frog Christ,” a seven-foot cross with a frog nailed to it. Artist Ashaundei Smith’s frog “is made of clay, and the cross was devised from reclaimed railroad wood. There’s also a barbed-wire crown of thorns around the frog’s head, and gold leaf was used to evoke blood dripping from the wounds caused by the crucifixion” (Philadelphia Magazine, Apr. 27). The work upset some students and staffers, who called the sculpture offensive. “This is anti-Christian mockery masquerading as art,” said sociology professor Karen Bettez Halnon. “This is anti-Christian hate speech…. If we decided next month to hang up a swastika or hang a transsexual from a rope, then everybody would be crying about it. Or something from Islam. This is all part of the persecution of Christians that is going on in this country right now.” The school said it has no plans to remove the sculpture.

Hundreds of female Islamic clerics in Indonesia issued an unprecedented fatwa — against child marriage. The lady clerics who gathered for the Indonesian KUPI Women’s Ulema Congress urged the Indonesian government to raise the minimum legal marrying age for women to 18 from the current 16. Indonesia is a majority-Muslim country and, according to UNICEF, has among the highest number of child brides in the world. Fatwas are issued regularly in Indonesia, but usually by the Indonesian Ulema Council, the highest Islamic authority in the country, which is made up of men. Badriyah Fayumi, steering committee chairman of the Indonesian KUPI Women’s Ulema Congress, told the BBC, “Through this conference, we want to state that female clerics exist, and have been proven to contribute, and this is the time to acknowledge their existence, and to give an appreciation for the…contribution of the female clergy” (Apr. 28). The congress also issued edicts against the sexual abuse of women and environmental destruction.

A 31-year-old artificial-intelligence engineer in Hangzhou, China, claims to have “married” a female robot he built from scratch. Zheng Jiajia wed his fembot, which he named Yingying, in a traditional ? though not legally binding ? Chinese ceremony. As is the custom, Yingying wore a black dress and had a red scarf draped over her head. Zheng claims Yingying can identify Chinese characters and images and even say a few simple words. But she can only communicate with him, which is a little odd, since Zheng has made her the official spokesperson of his company, a startup called Brain of Things. Now that they are married, Zheng plans to upgrade Yingying so she can talk, move around, and do housework (Huffington Post, Apr. 4).