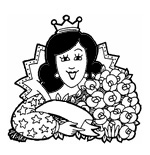 A so-called killing stone that, according to Japanese mythology, kept a malevolent spirit imprisoned for almost 1,000 years and killed anyone who touched it has split in two, sending believers into a state of panic (The Sun, March 8). Legend has it that the volcanic rock, or Sessho-seki, is home to the Nine-Tailed Fox, or Tamomo-No-Mae, a demon that assumed the form of a beautiful woman and took part in a plot to kill Emperor Toba, ruler of Japan from 1107 to 1123. Located in the mountainous region of Tochigi, near Tokyo, the rock has been a tourist attraction, but now visitors are fearful. Some speculate that the evil spirit is on the loose and will wreak havoc once more. “I feel like I’ve seen something that shouldn’t be seen,” said one visitor. Another said, “Here I thought 2022 couldn’t get worse. Now a furious Japanese spirit is freed from its ‘killing stone.’” Local reports suggest the rock actually started cracking a couple years ago when rainwater got inside. Officials are mulling over what to do with the rock’s remains.

The annual list of the most sinful states in America has been released, and, not surprisingly, Nevada, home to “Sin City,” took the top spot (My Christian Daily, March 2). The report, compiled by WalletHub.com, compares the 50 states across 47 key indicators of immoral or illicit behavior and across seven key dimensions: Anger & Hatred, Jealousy, Excesses & Vices, Greed, Lust, Vanity, and Laziness. WalletHub tracks data across set ranges from violent crimes per capita to excessive drinking to gambling disorders. Nevada was closely followed by California, Texas, Florida, and Louisiana. In comparison, Vermont, Wyoming, and Idaho took the 48th-50th places, making them the least sinful. “The truth is that each of the 50 states has its own virtues and vices,” WalletHub stated. “For example, New Mexico has among the worst drug use problem. And it certainly comes as no surprise that Nevada is the most gambling-addicted. But the cost of state sins is something we have to share as a nation…. Harmful behavior on the individual level can add up to staggering economic costs on a national scale.”

Former boxing champ Mike Tyson’s cannabis brand Tyson 2.0 has launched Mike Bites, ear-shaped edible gummies that capitalize on the notorious 1997 fight in which Tyson bit off a chunk of Evander Holyfield’s right ear (Forbes, March 17). Tyson was subsequently disqualified from the World Boxing Association Heavyweight Championship, his boxing license was revoked, and he was fined $3 million. Tyson 2.0 chairman Chad Bronstein says Tyson and Holyfield reconciled and have a great relationship. He added that the two former heavyweight champions have mutual respect despite Holyfield’s head-butting that allegedly drove Tyson to bite Holyfield’s ear almost 25 years ago. The gummies have a bite mark exactly where Tyson took off a piece of Holyfield’s cartilage. In 2019, when hosting Holyfield on his podcast Hotboxin’ with Mike Tyson, Tyson pitched an ear-shaped candy to him: “You might be in business because we’re going to make some…edibles [of the ear] that got a bite taken out of ’em.” Holyfield replied, “Well, I could do that.” It’s unclear if Holyfield is getting a chunk of the profits.