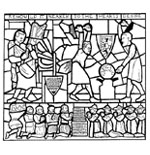 Terrorists who want to overthrow the U.S. government must now register with South Carolina’s Secretary of State and declare their intentions — or face a $25,000 fine and up to ten years in prison. The state’s Subversive Activities Registration Act, passed last year and now officially on the books, requires that “every member of a subversive organization, or an organization subject to foreign control, every foreign agent and every person who advocates, teaches, advises or practices the duty, necessity or propriety of controlling, conducting, seizing or overthrowing the government of the United States… shall register with the Secretary of State.” The registration fee is five dollars (Rawstory.com, Feb. 5).

An Arab ambassador had his marriage annulled after discovering that his veiled wife-to-be had a slight beard and was cross-eyed. The diplomat had only met the woman a few times, during which she had hidden her face behind a niqab, reported London’s Sun (Feb. 12). It was only after the marriage ceremony, when he first kissed his bride, that he discovered he had been wedded to a bearded lady. The unnamed ambassador told an Islamic Sharia court in the United Arab Emirates that he was tricked into the marriage. He claimed the woman’s mother had shown his own mother pictures of his bride’s sister instead of his bride, the report said. He demanded that the marriage contract be annulled and also called for the woman to pay him back nearly £90,000 for clothes, jewelry, and other gifts he had bought her.

In honor of her 50th birthday as one of the Western world’s most popular girls’ toys, Barbie was given a makeover — wearing a burqa. Outfitted in the traditional Islamic dress, the iconic doll went undercover for a charity auction in connection with Sotheby’s Save The Children. More than 500 burqa-clad Barbies appeared in the show at the Salone dei Cinquecento in Florence, Italy. Toy manufacturer Mattel backed the exhibition, which was the work of Italian designer Eliana Lorena. The company director of Laird Assessors from England applauded the move: “Bring it on Burqa Barbie, I think this is a great idea…. The message with Barbie for women is you can be whatever you want to be” (Daily Mail, Feb. 16).

Britain’s first Asian judge has spoken out to say children should be allowed to take knives to school — not all children, just Sikh children. Justice Mota Singh, a Sikh himself, is talking about the kirpan, a ceremonial three-inch knife worn as a show of faith by devout Sikhs. The judge’s comments to BBC Asia Network (Feb. 8) came after Compton School in northern London banned wearing the dagger to school. He said he understood the school’s concern with safety but said, “There has been no reported case, certainly none that I know of, of a Sikh using a knife in order to cause injury.”