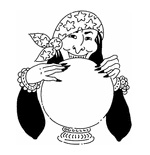 Self-declared witches in Romania say they are preparing to curse the country’s rulers for imposing a sixteen-percent income tax on their profession under an amended labor law. The professions of astrologer, fortune teller, and embalmer were not listed in the previous labor code, and therefore not formerly subject to income tax. In retaliation, a dozen witches plan to hurl poisonous mandrake plants into the River Danube, and queen witch Bratara Buzea has devised a spell involving cat dung and a dead dog. Alisia, one of the witches planning to bring “evil” on Romania’s president and government, told BBC News (Jan. 6) that her income was so small, the idea of taxing it was “foolish.” Buzea, 63, who was imprisoned in 1977 for witchcraft under the Ceausescu regime, gave a warning that her curses always worked: “We do harm to those who harm us.”

A Catholic youth group on the Spanish island of Majorca has taken an unorthodox approach to fundraising this year: They have produced a $13 calendar that features a nude version of the Passion of Christ. The calendar photos include a nearly naked trio of young men raising the cross on which Jesus will be crucified, and a Last Supper whose protagonists wear only tight-hugging underwear. In other shots the male models are entirely naked, covering their genitalia with plumed Roman helmets. “It is a daring and original idea that emerged because we are young and wanted to do something new,” Antoni Com­pany, a group member, told Spain’s Ulti­ma Hora newspaper (Jan. 6). The calendar marks the twentieth anniversary of the Davallament Youth Association, one of whose principal tasks is to act out a (fully clothed) version of the Passion every Easter. “It all came from the need to celebrate our 20th anniversary,” said Pep Mas, the group’s coordinator. “The actors are the same people who take part in the Easter week representation, and the pictures are shot in the same places. I don’t think, after all these years, that anyone can doubt our dedication.”

Iranian authorities have banned women from watching live broadcasts of soccer matches at public movie theaters. A state police agency that monitors Iranian businesses called for the ban because “the presence of women and families at movie theaters increases security risks and inappropriate behavior” (CNN, Jan. 22). Women are already banned from attending men’s soccer matches at Iranian stadiums. Hard-line government officials and clerics say the presence of women at men’s sporting events is not compatible with Islam.