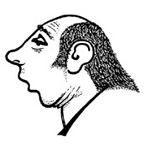 A page of photos from across the U.S. featuring humorous church signs — usually the type of sign with black, plastic, changeable letters — can be found at www.rd.com. One sign at a Unitarian Universalist church reads, “Get Behind Me, Satin,” either broadcasting the Gospel of the week or the wry joke of a bride in a flowing dress. Another offering, by Methodists in a cold climate, had this to say: “Too cold to change sign! Message inside.” A defunct Methodist church’s old, weathered sign apparently lost five crucial letters and now reads, “First Congregational Meth Church.” They better watch what they advertise! One sign-maker got a little personal: “Now is a good time to visit…Our pastor is on vacation.” And, finally, one waxed philosophical: “God does not believe in atheists therefore atheists do not exist.”

According to United Press International (Feb. 5), an 89-year-old Florida man has spent 25 years and about $10,000 building an Egyptian-themed coffin for himself. “It’s an unusual hobby and I’ll admit it,” said Fred Guentert, a woodworker who began crafting the coffin in the mid-1980s. It is made of cedar to resist rot and has been hand-painted red, black, gold, and green. Its lid is adorned with a hand-carved image of Osiris and other gods. Guentert said that he has admired Egyptian art since his youth, and that he was born the year archaeologist Howard Carter discovered King Tut’s tomb. When he dies he wants to be wrapped in a shroud, embalmed, and placed into the coffin, with a fiberglass mask of Osiris, the god of the afterlife, over his face. Then he’ll be put into the ground, with no viewing and no funeral. “Put me in the coffin and let me go,” he said.

What do you get when you cross a trio of handheld dumbbells with a knife, fork, and spoon? The Eat Fit Cutlery set! Always on the lookout for quirky items, Orange News (Feb. 13) reports that Brits are now able to tone upper-body muscles while they eat, thanks to the launch of the bizarre new silverware set. The hefty chrome knife and fork weigh over two pounds each, and the spoon weighs twice as much, at almost four-and-a-half pounds. Eat Fit Cutlery, which costs about $145 for a three-piece set, is said to be aimed at “gluttons in need of a workout.” A spokeswoman for Firebox, which developed the products, said, “This cutlery and dumbbell mix is designed for fitness fans with a sense of humor.”

Napolean Elvord became an instant millionaire when he won a $14.3 million Wisconsin Lottery jackpot early this year. But unlike most lotto winners, who splurge on large houses and luxury cars, the 58-year-old Vietnam veteran is going to use the money to extend his life. He suffers from kidney failure — believed to be a result of exposure to Agent Orange during the war — and has been on dialysis for five years. He needs a transplant and will use his winnings to pay for one once a donor becomes available. “I can only play it by ear,” said Elvord. “I can’t hope for something that may not even come through” (WKOW, Jan. 20).

Thy Rods of Iron, They Comfort Me... Got It Bad, I've Been Shot by Teacher... Driverless Crime... Cold Contempt... Gym Jesus... Wal-Marriage... The Sexual Revolution at Disney... and more