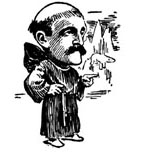 The largest group of Franciscan friars in the U.S. is now accepting prayer requests via text message, reports Reuters (Jan. 8). The Friars of Holy Name Province are a surprising addition to the list of religious groups offering this service, and their initiative offers a streamlined method of lodging prayer requests. The faithful simply text the word prayer, free of charge, and a welcome and a message box pop up. When the request is successfully sent, the sender receives a reply. The intentions are put on a website and are included collectively in the friars’ Mass and daily prayers. In hopes of reaching a younger audience, they plan to get onto Facebook and Twitter next. “If the Pope can tweet, friars can text,” said Fr. David Convertino. When asked if the friars are well into the digital age, he described them more as “rushing madly into the 19th century.” The average age of the 325 friars is about 60.

A Cold War-era bunker designed to save Soviet leaders from a nuclear attack hosted a 24-hour party for Russians willing to pay $1,000 per ticket to escape December’s alleged Mayan apocalypse (Reuters, Dec. 19). Bunker No. 42 is now a tourist attraction located 184 feet below ground in Moscow, near the Kremlin. It can accommodate up to 300 people and is complete with red alarm lights and loudspeakers that blast, “Attention! Attention! The enemy has carried out a nuclear attack!” Alexei Pavlovsky, tour guide at the bunker, helped promote the event: “There’ll be a children’s room with cartoons. For adults there’ll be movies, talks dedicated to the end of the world, and tours of the museum. There’ll be live broadcasts from other bunkers in other countries.” Anna, a student visiting in advance of the party, commented on the feeling of safety: “This is a comfortable, cozy place to spend not just a day, but a whole war and even the end of the world.”

The Daily Mail reports (Dec. 30) that Raymond Bell, pastor of The Cowboy Church of Virginia, believes that he’s discovered a new application for Equine Assisted Psychotherapy (EAP), a form of pet therapy in which a person sorts out his emotions by engaging in myriad activities with horses, from grooming and walking to playing games with the animal. Conventionally used as a stop-gap for addressing everything from trust issues to eating disorders to assuaging pain associated with repressed mental trauma, Bell believes that the therapy can also be used to rid homosexuals of their “addiction” to members of the same sex. “The first common misconception is that homosexuality is genetic, or hereditary, or as some say ‘born this way,'” Bell said. Instead, “homosexuality is a secondary effect from a single, or multiple, primary events in a person’s life.” EAP, he asserts, can be utilized to bring to light the specific events that lead a person to homosexuality in the first place. When asked whether the therapy has ever worked in the past, Bell said, “It is not now, nor has it ever been, in question.”

The American Humanist Association (AHA) decided that it needs to teach the U.S. government a thing or two about religion, so it has sent copies of its newly released Jefferson Bible for the Twenty-First Century to President Barack Obama and current members of Congress. The book was inspired by Thomas Jefferson’s Life and Morals of Jesus of Nazareth (1820), commonly known as the “Jefferson Bible,” which the AHA says “has stood alone for over two centuries as an example of how a revered religious text can be improved by extracting what’s good and relevant, while leaving behind what’s questionable, immoral or unnecessary.” The AHA’s version attempts to distinguish the good from the bad passages in several religious texts, including the Book of Mormon, the Qur’an, the Bible, the Buddhist Sutras, and the Bhagavad Gita, and concludes with a manifesto, “Humanism & Its Aspirations.” Says Humanist Press Director Luis Granados, “With today’s Congress representing a much more religiously diverse population, including a fifth of the population that is not religious, we thought it was appropriate to deliver a new Jefferson Bible that acknowledges that diversity” (Christian Post, Jan. 17).