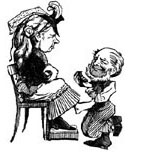 Disappointed Democrats still have a chance to get a commemorative edition of Newsweek that was set to be released if Hillary Clinton had won the presidential election. Newsweek quickly recalled the one-off issue, featuring a photo of Clinton with the title “Madam President,” following her loss, but 17 of the 125,000 copies were sold before the recall. Copies found their way to eBay and at least one fetched over $200 (Associated Press, Dec. 1). Newsweek editor-in-chief Jim Impoco described the pre-produced cover as a “routine” in the publishing industry; the magazine also designed a “President Trump” issue. Impoco said that prior to the election, the Clinton cover was used by Trump supporters as evidence that the election was “rigged.” Following Trump’s victory, he said the cover is being held up as an example of what some believe to be Newsweek‘s incompetence. “I actually preferred the ‘it’s rigged’ argument to the ‘boy are they dumb’ argument,” Impoco said.

A traditional Japanese doll modeled after Donald Trump has raised eyebrows among some Tokyo shoppers (Reuters, Jan. 26). The Trump doll, clad in a gold and black kimono with a golden-haired head, was unveiled by Kyugetsu Co. Ltd., a maker of traditional hina dolls bought for “Girls Day,” a celebration of the health and happiness of girls. Families decorate their homes for the March 3 holiday with elaborate sets of two-foot-high dolls, to their daughters’ delight. Each year, Kyugetsu creates hina dolls modeled on four influential people, two athletes and two politicians. The 2017 offering also includes Yuriko Koike, the first female governor of Tokyo. Hisatoshi Yokoyama, senior vice president of Kyugetsu, defended the decision to depict Trump. “There is talk about his derogatory comments about women, but we made this in the hope that he will make the world better.” Last year, the company displayed a doll of Hillary Clinton as one of the “new leaders” expected to guide the world in 2016.

There’s a special ingredient in the new plastic cash being distributed across the United Kingdom: animal fat. The Bank of England has admitted that traces of tallow, derived from animal fat, can be found in the new British £5 notes that went into circulation last September. The news prompted an immediate outcry. “This is unacceptable to millions of vegans, vegetarians, Hindus, Sikhs, Jains and others in the U.K.,” read the text of an online petition that quickly gained more than 15,000 signatures (CNN Money, Nov. 29). The same type of polymer is used to make cash in 23 other countries, including Australia, Canada, Mexico, and New Zealand. Central banks have been switching to polymer cash in recent years because the flexible material resists dirt and lasts longer than paper cash. It also has some robust security features that are only possible with plastic money.

The Privileges of Paid Membership... Wings & a Prayer... Church of St. Ronald?... Holy Cross Dressing... Angling for Providence... Jesus of Philadelphia... Legal Lightweights... Blessings from Jeff Bezos... Your 2014 Word of the Year