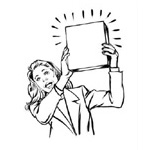 Ed. Note: This year marks the tenth anniversary of The News You May Have Missed. In celebration of this milestone, we bring you the “top ten” entries, as determined by the editors, from the first ten years of this column.

The Bible Society in Australia has translated the Old and New Testaments into text-message language, the form of shorthand communication made popular on the Internet and cell phones. “In da Bginnin God cre8ed da heavens & da earth,” the SMS (short message service) version begins. “Da earth waz barren, wit no 4m of life; it waz unda a roaring ocean cuvred wit dRkness.” A spokesman for the society commented, “The old days when the Bible was available only in a sombre black cover with a cross on it are long gone” (Telegraph, Oct. 7, 2005).

A Chinese man from Jiaxing, near Shanghai, attempted to sell his soul on Taobao, China’s top online auction website. He attracted bids from 58 potential buyers before the posting was pulled, reported China Daily (Apr. 6, 2006). “We reviewed Taobao’s policies and realized we had no specific policy on the selling of souls,” said Porter Erisman, spokesman for Taobao’s parent company, Alibaba.com. Erisman said Taobao wasn’t opposed to the idea of soul-selling online, but wanted more proof that the seller could provide the goods.

The letter “X” soon may be banned in Saudi Arabia because it resembles the mother of all banned religious symbols in the oil kingdom: the cross. The new development came with the issuing of a fatwa, or religious edict, by the nation’s Commission for the Promotion of Virtue and Prevention of Vice. The Commission’s damning of the letter “X” came in response to a Ministry of Trade query about whether it should grant trademark protection to a Saudi businessman for a new service carrying the English name “Explorer.” When Amru Mohammad Faisal’s bid was rejected, he penned an editorial sarcastically inviting the commission to expand its edict to the “plus” sign in mathematics and accounting, in order to “prevent filthy Christian conspiracies from infiltrating our thoughts, our beliefs, and our feelings” (New York Sun, Jan. 15, 2007).