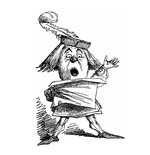 A fed-up Polish priest has gone on strike because his parishioners don’t leave enough on the collection plate. Fr. Piotr Lenart, pastor of a Catholic parish in Deszkowice in southeast Poland, refuses to speak during Mass. Instead he stands in silence in front of the congregation for fifteen minutes. “At first we thought there was something wrong with him,” said one elderly parishioner. “It was only after a while we worked out that he had gone quiet because he was angry with us” (Ananova, Oct. 9).

Bishop John Thattunkal, 58, of the Diocese of Kochin, India, recently adopted a 26-year-old woman. According to the Times of India (Oct. 21), the Bishop adopted the adult woman with the consent of her non-Catholic Christian family. The woman’s father said he had given away his daughter to help the Bishop in his “spiritual” quest. “She calls me papa and the bishop grandpapa,” he said. The Bishop says he met the woman during a pilgrimage to Jerusalem and was impressed by her spirituality. “I have only fatherly love towards the woman who has spiritual powers,” he explained. “This relationship is giving me spiritual refreshment.” In answer to calls by his priests to resign over the matter, Bishop Thattunkal said he would step down if the Vatican directed him to do so, but he maintained he’s done nothing wrong: “I have not deviated from the tenets of the Church in any manner. If [adopting a young woman] was against the teachings of the Catholic Church, I would be ready to annul the adoption.”

Bishop John Thattunkal, the controversial Indian “adoption bishop,” admitted to conducting a blessing ceremony of his residence using human blood, considering it the Blood of Christ. Whose blood did he use? Bishop Thattunkal admitted it was given by the 26-year-old woman he had recently adopted (India Today, Oct. 21).

Naked celebrants abandoned plans to hold a second religious service after media coverage of their first service, held in a nudist park in the Netherlands during the summer, led to a flood of threatening phone calls and e-mails from more orthodox Christians. “I don’t understand what all the fuss is about,” said a spokesman for the Garden of Eden group. “We are just a group of Christians and we want to hold a church service.” The Dutch naturist Christians, part of a global movement, held their first service in June, when a clothed priest presided over a nude congregation of eighty people. Christian naturists look to the story of Adam and Eve in the Garden of Eden as the model for their beliefs and ceremonies: When God created man and woman, Adam and Eve were both naked and “felt no shame” (The Jewish Journal, Oct. 7).