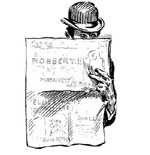 The principal, a dozen staff members, and about 250 female students at India’s prestigious Loreto Convent School participated in a séance to contact Christ. The “date with Jesus” session featured an occult medium grunting, growling, and making hissing sounds while “inducing” Jesus to enter his body. After witnessing what many thought was the medium’s massive heart attack, a dozen students fainted and a couple needed medical attention. Principal Sister Monica admitted some girls fainted during the “holy experience.” She explained: “It is not unusual to be terrified when the Lord comes before you. Even I was frightened…. It is very painful when Jesus enters [the medium’s] body. That is why he was writhing on the ground” (Times of India, Sept. 10). What hocus-pocus.

Jose Luis de Jesus Miranda, a 60-year-old former heroin addict, believes he is the living incarnation of “Jesus Christ Man” as well as the head of “God’s Government on Earth,” which is based in suburban Miami. As any other head of state, Miranda, a divorced father of four, is protected by a security detail that mimics the U.S. Secret Service. Miranda preaches what he calls the “freedom to indulge,” where there is no sin, no devil, and no Hell. This is music to the ears of his followers, mostly Hispanic men and women who believe they are God’s chosen people, predestined for salvation no matter what they do on earth (CBS 4-News Miami, Sept. 12).

Evangelist preacher Franck Kabele, 35, told his congregation he could repeat the biblical miracle of Jesus’ walking on water. Kabele drowned after walking out to sea from a beach in Libreville, the capital of Gabon, a nation in west Africa. One eyewitness said: “He told churchgoers he’d had a revelation that if he had enough faith, he could walk on water like Jesus. He took his congregation to the beach saying he would walk across the Komo estuary, which takes 20 minutes by boat. He walked into the water, which soon passed over his head and he never came back” (Daily Record, Aug. 30). The lesson: Don’t tempt Jesus.

The Batavia School District in western New York has refused to transfer high school students out of classes being taught by a transsexual teacher. Five parents submitted written requests to the district board, asking that their children be removed from the classroom of a cross-dressing male science teacher who is currently “undergoing sex change medical treatment.” Superintendent Richard Stutzman said the parents’ requests did not meet the district guidelines. Furthermore, the school district has warned parents that their children must start addressing the man as “she” and “Ms.” or be disciplined for sexual harassment (LifeSiteNews, Sept. 8).