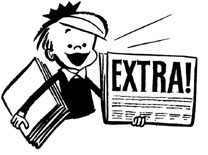 Since the election of Joseph Ratzinger to the papacy, a Puerto Rican fireman has claimed to be a reincarnation of Pope John Paul II. Edwin Gonzalez Concepcion, who bears no physical resemblance to the late Pontiff, also charges that Pope Benedict XVI is the “Antichrist” (despite the fact that he was formerly John Paul’s right-hand man for a quarter century). According to the Associated Press (Dec. 13), Bishop Ulises Casiano Vargas was forced to excommunicate Concepcion and his followers, who refused to desist from their belief that the dead Polish Pope has manifested himself in the Caribbean.

The Brazilian city of Nova Iguacu has passed a bill that requires night clubs, shopping malls, movie theaters, and large restaurants to provide a third type of bathroom specifically for transvestites. City Councilman Carlos Eduardo Moreira estimates that there are nearly 28,000 transvestites in this suburb of 800,000 on the outskirts of Rio de Janeiro. “It’s a serious problem in society,” Moreira explained to the Associated Press (Dec. 15). “The women don’t feel comfortable having them in the ladies’ room, and the men don’t want them in their bathroom either.”

According to a new grammar rule in the Netherlands and the Flemish half of Belgium, the name “Christ” will soon be written with a lower-case “c,” as stipulated by an orthography reform adopted in October 2005. The change will be mandatory starting in August 2006. The penalty for transgressing the new grammar law has not yet been disclosed (Catholic News Agency, Oct. 19).

According to the Israeli newspaper Yedioth Ahronoth (Dec. 30), a 41-year-old female Jewish millionaire from London married a 35-year-old male dolphin named Cindy in Israel’s southern resort town of Eilat. Fifteen years ago, Sharon Tendler, a British rock concert producer, took a liking to the dolphin. Since then she has traveled to Eilat three times a year to spend some precious moments with her underwater sweetheart. On the big day, the thrilled bride, wearing a white dress, walked down the dock and kneeled down before her groom, who was waiting in the water. “I’m the happiest girl on earth,” she said, adding, “I made a dream come true, and I am not a pervert.”