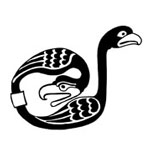 Spectators in St. Peter’s Square gathered in late January to witness the conclusion of the Vatican’s annual “Caravan of Peace” event. Standing alongside Pope Francis on the balcony of the Apostolic Palace, a boy and a girl released two “peace doves.” Before the doves could take flight, they were attacked by a seagull and a large black crow. One of the doves escaped, but the crow repeatedly pecked at the other dove until it was able to break free and fly off. Last year’s “Caravan of Peace” was witness to a similar event. A single gull attacked the released birds, both of which immediately turned around and flew back into the palace. According to National Geographic Daily News (Jan. 27), the peace doves were attacked because they are “freakishly white,” the result of hundreds of years of domestication and breeding: “If you’re an aggressive, badass bird (as gulls and crows tend to be), what’s going to draw your attention? The pure-white bird. What’s going to be the target of your aggression? The pure-white bird.”

In January 2013 British stand-up comedians Sanderson Jones and Pippa Evans founded Sunday Assembly, which they describe as “part atheist church and part foot-stomping show,” featuring secular music and special speakers, such as authors and fellow comics. Yet, shortly after launching a “40 Dates and 40 Nights” roadshow last fall, a mission to spread their atheist assembly to cities around the globe, three members of the New York Sunday Assembly decided to break away from the group and launch their own “denomination,” The Godless Revival. Lee Moore, one of the founders, asserts that he had been advised by Jones to refrain from using the word atheist, not to feature atheist speakers, and to host the meetings in a more family-friendly location than the local dive bar. Moore, who has accused Jones and Evans of having “a real problem with atheism,” denounced Sunday Assembly as “a humanistic cult” (Christian News Network, Jan. 13).

A former catering worker who identifies as neither female nor male is suing Bon Appetit Management Company, reports The Oregonian (Feb. 7). Valeria Jones alleges that co-workers repeatedly called her “miss,” “lady,” and “little lady,” despite explanations that Jones “was not a female or a male and that the term was unwelcome.” Jones alleges that co-workers directly told her that she looked like a woman, and made female celebrity comparisons. The lawsuit, filed in Multnomah County Circuit Court, says Jones preferred to be addressed by a gender-neutral pronoun, though the term is not identified. Jones is seeking $18,682 in lost wages and benefits, and $500,000 for humiliation and suffering.

A Kentucky pastor who starred in a reality show about snake-handling in church has died — of a snakebite (CNN, Feb. 18). Jamie Coots, a third-generation “serpent handler” and pastor at Full Gospel Tabernacle in Jesus Name in Middlesboro, died after refusing to be treated, police said. The National Geographic show Snake Salvation featured Coots and others handling all kinds of poisonous snakes — copperheads, rattlers, cottonmouths. The ardent Pentecostal said he believed that a passage in the Bible suggests poisonous snakebites will not harm believers as long as they are anointed by God. The channel’s website stated that, “even after losing half of his finger to a snakebite and seeing others die from bites during services,” Coots “still believes he must take up serpents and follow the Holiness faith.” Snake-handling is illegal in most states but is still practiced, primarily in the rural South.

The News You May Have Missed: November 2022