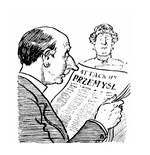 Groups of young, baton-wielding, burqa-clad women from Islamabad’s Red Mosque have launched a crackdown against immorality in the Pakistani capital. In June they targeted six Chinese masseuses, who were kidnapped and “re-educated.” The masseuses were later released, wearing burqas, and having been told in no uncertain terms that the mosque did not approve of them handling male flesh, in the course of a massage or otherwise. The code of the Red Mosque — whose seminaries contain upwards of 8,000 students — is strict. Officials readily admit that they do not permit music or games, and they denounce activities such as kite-flying (The Independent, June 29).

Fr. Dean Dombroski of St. Joseph’s Church in New Franken, Wisc., has removed his parish organist and choir director from her duties, saying her sale of sex toys was not “consistent with Church teachings.” Linette Servais, 50, played the organ and sang with the parish choir for 35 years. She works as a salesman for Pure Romance, a $60-million-per-year business that sells spa products and sex toys at homes parties attended by women. “After I got over the initial shock, I prayed over this a long time,” Servais said of being fired. “I feel that Pure Romance is my ministry.” In a three-page letter to fellow parishioners, she explained that she felt compelled to help other women, especially those suffering from problems caused by cancer. “Father Dean made it sound so sinful,” she said. “There is so much more to this business than [sex] toys” (Chicago Sun-Times, May 31).

Shock-rocker Marilyn Man­son was told this summer that he was not welcome at Germany’s Cologne cathedral. Manson told reporters he didn’t think cathedral staff recognized him as the American singer known for albums such as Antichrist Superstar. He said, “They didn’t let me in because I was wearing lipstick.” The 38-year-old rock star had to be content with a view through the doors, but he described the cathedral, one of Germany’s top tourist attractions, as “one of the most beautiful places that I’ve ever seen” (Ananova, July 2).

A senior Polish official has ordered psychologists to investigate whether the popular BBC TV show Teletubbies promotes a homosexual lifestyle. The spokesman for children’s rights in Poland, Ewa Sowinska, singled out Tinky Winky, the purple character with a triangular aerial on his head. “I noticed he was carrying a woman’s handbag,” she told a Polish magazine. “At first, I didn’t realize he was a boy.” Sowinska wants the psychologists to make a recommendation about whether the children’s show should be broadcast on public television in Poland (May 28, BBC News).