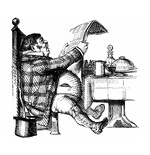 John Wilkinson and Charlotte Law, two self-acclaimed Jedi Knights, want their Star Wars-inspired “faith” to be formally recognized by the United Nations as an international religion. According to the 2001 census, 400,000 people recorded it as their faith in the United Kingdom alone. Wilkinson and Law, who have taken the professed Jedi names Umada and Yunyun, said: “Like the UN, the Jedi Knights are peacekeepers and we feel we have the basic right to express our religion…” (Ananova, Nov. 15).

Phil Padwe is author and illustrator of a new children’s book on tattoos. In Mommy Has a Tattoo, a little boy named James is afraid of a heavily tattooed neighbor — until he realizes his mother has one, too. “I wanted to keep it simple,” explained Padwe, who has somewhere between 25 and 30 tattoos himself. “I didn’t want to get into really heavy questions or pass judgments. It’s about teaching tattoo tolerance.”

The New York City Board of Health, with the support of Mayor Michael Bloomberg, is considering a policy that would permit people born in the city to change the sex recorded on their birth certificates if they so desire. The idea, as described by advocates, is “to separate sexual identification from anatomy.” Only an affidavit from a doctor or mental health professional making the case for the change would be required. Applicants would have to have changed their name and shown that they had lived in their adopted gender for at least two years. “Surgery versus non-surgery can be arbitrary,” explained Dr. Thomas R. Frieden, the city’s health commissioner, to The New York Times (Nov. 6). “Somebody with a beard may have had breast-implant surgery.”

Hundreds of pagans serving prison sentences were given the day off work for Halloween “out of respect for their religious beliefs.” Prison Service bosses in Britain instructed staff to grant all pagan convicts, including devil worshipers and Satanists, special privileges on October 31, including the right to wear hoodless robes. A spokesman explained: “The Prison Service is committed to treating all prisoners with decency and humanity, which includes respecting those of all religions” (Evening Standard, Oct. 29).