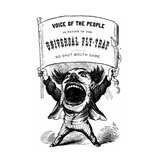 For years, motorists driving on I-75 between Dayton and Cincinnati, Ohio, enjoyed the view of an enormous, five-story statue of Jesus. But many were shocked when the statue — known locally as “Touchdown Jesus” due to its bent-at-the-elbow, raised-arm gesture — burned down after being struck by lightning in June 2010. Now, a replacement, of the same height but of different design, is back overlooking the highway (Cincinnati Enquirer, Oct. 1). The new 52-foot statue was dedicated at a Sunday-evening service followed by prayer and fireworks. Naturally, protesters showed up to spoil the festivities; they reminded all hearers that the original statue was struck down because it was a graven image. “God struck down the last statue. What do you think is going to happen to this one?” they shouted. Pastor Lawrence Bishop II briefly acknowledged the protesters, saying their actions were “the demons trembling.” He preached, “Solid Rock Church says to the world, ‘We give you Jesus Christ!'” Church members were jubilant. “It gives you hope,” one remarked. “God is great, and God is huge.”

As seen in a recent National Geographic online video, “bagel heading” has become the latest craze among youth in Japan, reports CBC News (Sept. 27). The procedure, which is performed at registered “body-modification clinics” that regularly administer piercings and tattoos, involves injecting approximately 400cc of saline directly into the flesh of the forehead using a needle and slow IV drip. A large bubble forms after two hours, and then the “body artist” removes the drip and presses a thumb into the middle of the blob, producing a large, bagel-like shape on the client’s forehead. The effect is temporary; the saline is absorbed by the body within 24 hours. In the aforementioned video, three people are shown undergoing the procedure in Tokyo. As one “bagel” is formed, a small group of onlookers cheers. “Cute!” exclaims one young woman. “Oh sweet buttery bagels,” laughs another man, seeing himself in the mirror. “I look delicious!”

Students at the Massachusetts Institute of Technology Media Lab have created a “wearable social media vest” that inflates and squeezes the wearer every time someone “likes” a video, photo, or status update on his Facebook wall (Boston Globe, Oct. 9). The “Like-A-Hug” vest, which began as a class project by students at Harvard and MIT, has enjoyed wide media attention. Vest co-inventor Phil Seaton said the recent fascination with “Like-A-Hug” has been mind-boggling: “It’s very strange,” he said. “We are getting calls from Ellen DeGeneres, Anderson Cooper and the Today Show. Everyone wants to get a chunk of it somehow.” The current vest design is considered impractical because of its bulk. But after a few modifications, it may soon be seen “hugging” a member of the Facebook generation near you.

An art exhibition in Belgrade, Serbia, that portrays Jesus Christ as a transvestite surrounded by gay, lesbian, and transsexual disciples has been put under armed police guard over fears that it could provoke a riot. In controversial Swedish artist Elisabeth Ohlson Wallin’s version of the Last Supper, the Savior is dressed in women’s clothes, wears high heels, and is surrounded by disciples wearing S&M objects and lingerie. Two thousand guards have been stationed around the Ecco Homo exhibition where the artwork resides, amid threats of mass protests, reports Britain’s Daily Express (Oct. 4). City officials also canceled a “gay pride” march that had been timed to coincide with the exhibition after threats of violence by far-right group Movement Dveri.