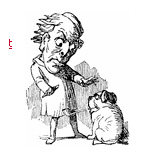 A naked dining fad is proving popular in New York. With the motto, “no hot soup,” about 50 diners meet regularly for meals where the dress code is literally non-existent. John Ordover, who rents city restaurants for the monthly dinner parties, assured the New York Post (July 21): “We’re not out to shock or put on a public spectacle. We want only to do things that other people do in the way that we are most comfortable doing them. That, for us, is without clothes.” Diners are served by regular restaurant staff — forced by city laws to keep their clothes on. “If you work in a restaurant in New York City,” added Ordover, “the chances are you’ve seen a lot more shocking things than a room full of naked diners.” Naked dining is believed by some to be an outgrowth of naked yoga, popular in the Big Apple for some years now.

Jack Vinyardi of Kansas City describes himself as a “nondenominational interfaith animal chaplain.” In an interview with the Kansas City Star (July 25), the Pet Reverend explained that his vocation is to comfort those who are grieving the loss of a beloved pet, be it a cockatoo or a cocker spaniel. According to his website, www.pet-rev.com, the Pet Reverend “offers a compassionate ear while making difficult decisions, a safe place to acknowledge the love and the loss, and provides a spiritual framework which eventually leads to comfort and acceptance.” In addition to providing “pet loss grief support,” Vinyardi conducts memorial services — for animals only. The former chaplain of the Lake of the Ozarks Yachting Association says he confidently asserts only one religious truth: “that our relationships with our companion animals are both emotional and spiritual, so they never really end, wherever our bodies and souls go after death.”

An American who has been dubbed the world’s first pregnant man has given birth to a baby girl in Oregon. Thirty-four-year-old Thomas Beatie was born a woman but underwent “gender-realignment surgery” and is now legally recognized as a man. He was able to conceive because he retained his female organs when he underwent the sex change. Beatie announced his pregnancy in April on the Oprah Winfrey Show, telling the talk-show host, “I opted not to do anything to my reproductive organs because I wanted to have a child one day. I see pregnancy as a process and it doesn’t define who I am” (Belfast Telegraph, July 4).

A Catholic elementary school principal was arrested on his summer vacation after going on a naked romp with two other men in the backyard of a vacant home in Westchester County, New York (July 15, WCBS-TV). Gabriel DeJesus, principal of Sacred Heart School for the Arts in Mount Vernon, was apprehended by police after a 911 call by a neighbor. He and another man were charged with misdemeanor trespassing, public lewdness, and disorderly conduct. The third man ran naked down the street before he could be apprehended, according to police. The Archdiocese of New York assured reporters that DeJesus has always been a well-regarded educator.