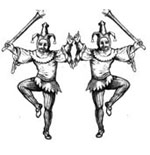 The Boy Scouts of America announced that it will allow transgender children who identify as boys to enroll in its boys-only programs (Associated Press, Jan. 30). The organization said it will begin basing enrollment on the gender a child or parent lists on the application to become a scout. For more than 100 years, the Boy Scouts relied on the sex listed on a child’s birth certificate to determine eligibility. But “that approach is no longer sufficient,” the group said in a statement, “as communities and state laws are interpreting gender identity differently, and these laws vary widely from state to state.” The national Girl Scouts organization, which is not affiliated with the Boy Scouts, has accepted transgender members for years.

Chalupa-lovers, rejoice! Taco Bell has announced plans to host wedding ceremonies at its 24-hour restaurant in Las Vegas starting this summer. Included among the branded perks are a Cinnabon Delights wedding cake and a bouquet made of hot-sauce packets (Orange County Register, Feb. 14). “Couples can come right in and order a wedding off of our menu,” said Chief Marketing Officer Marisa Thalberg. After a couple purchases a wedding package at the counter, they can expect the ceremony to take place in the upstairs wedding chapel within four to six hours. The $600 package also includes a Taco Bell garter, bow tie, “Just Married” his and her T-shirts, and branded champagne flutes. After tying the knot, couples will be treated to a box of a dozen tacos. Taco Bell is not the first restaurant chain to offer weddings in Vegas. Denny’s has been offering a $199 wedding package since 2013.

At first glance, the selfies are perfectly ordinary. They have hashtags and emojis (star, smiley face, heart), and they feature a variety of athletic poses. One man is juggling six pink balls. A woman strikes a yoga pose. Another stands on one leg. But Shahak Shapira, an Israeli-German writer, took issue with the setting: the Berlin Holocaust memorial. So he copied 12 selfies from public social-media accounts taken at the memorial and published them on a website called Yolocaust. The name is a combination of the popular social-media hashtag Yolo (“you only live once”) and the word Holocaust. When the viewer’s cursor hovers over the selfies at Shapira’s site, the background of the memorial is replaced by historical images from concentration camps, leaving the unwitting selfie-takers suddenly surrounded by emaciated bodies and corpses. “I felt like people needed to know what they were actually doing, or how others might interpret what they were doing,” Shapira said. At the bottom of his site is an e-mail address, undouche.me@yolocaust.de, to request that an image be removed. “I guess that’s my compromise,” Shapira said (BBC News, Jan. 20).