Volume > Issue > The Aesthetics of God 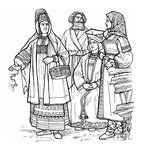 By Edwin Fusell | October 1994
Edwin Fussell is currently working on a book on Balzac as a Catholic novelist. His latest book is The Catholic Side of Henry James.

The narrator of the new translation — in the Land of Oz all translations are new and so revolutionary you would never believe you were reading the same text — is forever saying, “of this, more later” and “and so on and so forth,” virtually an invitation to spin the wheels of your own imagination. He also says several times that The Brothers Karamazov is only the first half of a novel, the finished product to feature Alyosha as hero, but Dostoevsky never wrote the second half. What we have is enough, most read­ers probably think, nearly 800 pages of almost insu­perable complexity wherein it sometimes seems as if every word were folded over against another. And cer­tain words are more cunningly compounded than others. You have to look for them if you want to ferret out a theme or themes. And some of them are diffi­cult and perhaps embarrassing in modern American diction. The word “joy” is nearly impossible to say, owing to that college-girl waitress who is always slamming the plate on the table and squealing, “En­joy!” The word “beauty” is even worse. In the 1930s it was proscribed in the field of literary criticism among the Anglo-Saxons for being “subjective” and “religious.” Every reader of The Brothers Karamazov has a theory. Mine is the result of re-readings over a period of half a century. It is no worse than some I have heard.

Beauty is as near to being a central concept as one is likely to find: It bears on people’s passions, on art, and on God, as thought and felt and believed and worshiped in Orthodoxy — we suspect that Dostoevsky’s conception of a Catholic’s God re­sembles an eighth-grade arithmetic teacher plotting Jesuitical tyranny. So it is an Orthodox God, a Rus­sian Orthodox God, we would be at, and among His divine names none is more powerful than Beauty, all the more so because Beauty is also an alternative name for Art, even European Art. Not Ivan, although a poet, not even Alyosha, who likewise has his aesthetic side, is its spokesman as much as is poor, drunken, confused Dmitri. He is not confused on this issue, however, and here he is, fulminating at Alyosha: “Beauty is a fearful and terrible thing! Fear­ful because it’s undefinable, and it cannot be defined because God gave us only riddles. Here the shores converge, here all contradictions live together.” There, by the way, is a good brief description of The Brothers Karamazov in its aesthetic rather than in its philosophically misinterpreted reality (years ago I wearied of “existentialist” interpretations based on taking “The Grand Inquisitor” out of context and running with it). Beauty has a practical bearing. Moreover, because it applies to the body of Grushenka, which Dmitri wants and will have, no matter what, and his father also wants her almost as much. The metaphor of the shores converging sounds as if it came from the Book of Revelation and I doubt if it can be unpacked, not even by psychobabble. As for Beauty, Westerners, including Catholics, are afraid of it and will have as little of it as possible.