Volume > Issue > Is There Such a Thing as Catholic Feminism? 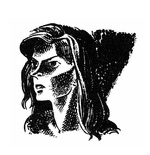 By Annesley Anderson | November 2021
Annesley Anderson is a Catholic educator who lives with her husband in Northern Virginia. She holds a master’s degree in literature from Boston College. Her work has appeared in Saint Austin Review and Twentieth-Century Literature.

Kristin Lavransdatter lies on her deathbed waiting to receive the Last Rites. She has just vomited a lot of blood and is moving in and out of consciousness. The plague doesn’t make for an easy passing. As Kristin slowly takes off her wedding ring, she notices that the “M,” from the symbol of the Virgin Mary, on the inside of the ring has left a mark on her finger, and that it will not fade before she dies. She realizes, suddenly and with joy, that, despite her inconstancy, the Lord has been with her. He has worked in her heart and her life, and it is through her body that He has marked her as His own.

The fictional story of this 14th-century Norwegian woman speaks directly to the concept of Catholic feminism.

There’s a general consensus that the descriptors Catholic and feminist don’t go together. Feminists have issues with Catholic teaching, and many Catholics feel at least discomfort with feminist ideology. Even those Catholics who argue that Catholic feminism does exist often add the caveat that it requires a rejection of certain Catholic teachings, and so they prioritize feminism over orthodoxy.

But another option exists: an entirely orthodox Catholic feminism, at the heart of which lies the desire to advocate for the dignity of women and to tell their stories.

Sigrid Undset’s Kristin Lavransdatter (1922) gives us a glimpse of what such a Catholic feminism might look like. Undset tells Kristin’s story from her childhood through her tumultuous marriage and motherhood, until she eventually becomes a nun and dies of the plague after caring for other victims. Undset presents Kristin as a passionate woman: Her life is a continual struggle between competing desires to “travel the right road” or take her own “errant path.” As a young woman, she refuses to marry the man to whom she had initially agreed to be betrothed, insisting instead on marrying the dashing but reckless Erlend Nikulaussøn. Their life together is often emotionally devastating.

Undset, a Norwegian convert to Catholicism, won the Nobel Prize for Literature in 1928 for her powerful depictions of medieval life. The vast cathedrals, rolling farmlands, jagged mountain peaks, and ale-flowing feasts she describes so effectively are matched by the equally stunning inner landscapes of her characters. Undset shows us the importance of spirituality (both Catholic and pagan) and community, the inherently moral and eternal nature of human life, and the deep beauty of the physical world.