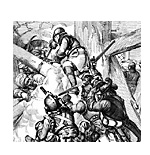 By Timothy D. Lusch | June 2016
Timothy D. Lusch is an attorney and writer in Ohio. His articles have appeared most recently in Saint Austin Review and at the website of Crisis magazine. He blogs about reading and living deeply at www.pityitspithy.com.

“War must be, while we defend our lives against a destroyer who would devour all; but I do not love the bright sword for its sharpness, nor the arrow for its swiftness, nor the warrior for his glory. I love only that which they defend.” — Faramir in The Two Towers by J.R.R. Tolkien

On the eve of the Second World War, British and French leaders concluded the Munich Agreement of 1938 with Adolf Hitler, ceding the so-called Sudetenland to Germany in exchange for Neville Chamberlain’s “peace for our time.” Months later, in violation of the treaty, Nazi tanks rolled into Prague. Europe, and eventually the whole world, entered the penumbra of war. Not long after, T.S. Eliot wrote in The Idea of a Christian Society:

I believe that there must be many persons who, like myself, were deeply shaken by the events of September 1938, in a way from which one does not recover; persons to whom that month brought a profounder realization of a general plight…. The feeling which was new and unexpected was a feeling of humiliation, which seemed to demand an act of personal contrition, of humility, repentance and amendment; what had happened was something in which one was deeply implicated and responsible.

Seventy-eight years later and some two hundred fifty miles away, six global powers and Iran signed the Joint Comprehensive Plan of Action in Vienna. The JCPOA claims to cut off Iran’s pathways to a nuclear weapon, ensure ongoing monitoring and transparency of its nuclear program, and provide for snapback sanctions should Iran violate the agreement. In return, the U.S. and other signatories agree to lift sanctions on Iran, directing an estimated one hundred fifty billion dollars to the Middle Eastern nation.

The JCPOA — which has been touted as an insurance policy against a nuclear Iran at best, and a delayed nuclear Iran at worst — was applauded by many world leaders and talking heads in the news media. While history does not repeat itself, folly does. And it remains to be seen whether the conclusion of this agreement is folly. It certainly looks that way. But beyond the validity, indeed the necessity, of international agreements, something is lost in all the political analyses plastering our pages: appreciation for the cultural consequences of interaction at the highest political and diplomatic levels. This is to say nothing of the gravest consequences of the JCPOA: its potential effect on Christians and Jews the world over.

In that liminal space between a martyr’s temporal suffering and his eternal reward, Fr. Jacques…

Will Chinese Catholics belong to the Church, or will they be sold over as part of a political deal that some in the Vatican wish to strike with the powers of the world?