Volume > Issue > On Repressing the Fear of the Lord 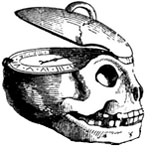 On Repressing the Fear of the Lord

By John Linton | December 1996
John Linton is a professional jazz pianist based in Louisville, Kentucky.

Well, the news is in from the Church of England: Hell is merely “nonbeing.” Indeed, in most of today’s Christian churches, good old hot and horrid Hell has fallen by the wayside, has been quietly shunted aside for being crude, oppressive, excessive, and outmoded. Apparently, the worst that the worst people need now fear — even those who’ve dedicated their lives to programmatic brutality and murder — is a blinking out, a settling of all accounts to zero. Not so bad when your account is grossly overdrawn, even in blood. A metaphysical Chapter Eleven, that. Quite the tax code when a person can claim an infinite exemption, and without pleading for mercy!

As a 22-year-old Catholic, I pause to consider the fact that I have never, ever, heard a priest utter the word “Hell” from the pulpit. Of course I can feel the dim resonances of the Brimstone Age, not 50 years past, when invoking Hell was more the rule than the exception — I’ve seen older Christians shiver. But in the Christian world today, Hell is a word one rarely hears, much less uses, except in jest.

Curiously though, I find myself drawn to the more vivid depictions of Hell in literature. Dante’s Inferno is a beautiful metaphorical elaboration of the hierarchy of sins against God. In it, the visceral rawness of the torments Dante devises invites us to contemplate the visceral rawness of those corresponding sins within us, perhaps yet unborn. This approach is exceedingly effective for a person with a lively imagination, like, say, myself. Melville’s sermon in Moby Dick is stirring, the kind of wind gust one rarely dreams of hearing in today’s churches. And James Joyce’s depiction of Hell in Portrait of the Artist is smolderingly brilliant and riveting, precisely because Joyce expounds the world of Hell in all its infinitely miserable detail — a world that both fascinates and repels him, as did everything in Catholicism.

If Everyone Is Saved...

If no one goes to Hell, then all the talk about Hell in the Bible — and from the Church — is utterly cruel, needlessly cruel, maybe sadistic.