Volume > Issue > On Man's Many Attempts to "Kill Death" 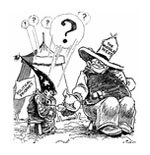 On Man’s Many Attempts to “Kill Death”

SALVATION IN SCIENCE? TRIUMPH IN TECHNOLOGY?

By John Lyon | April 2017
John Lyon has held teaching and administrative positions at several universities, including Notre Dame, Ball State, Kentucky State, and St. Mary's (Minnesota). More recently, he taught literature and history at a classical academy in Wisconsin. He has also farmed, raising berries, flowers, vegetables, and apples, and operated a stall at the local farmer's market in Bayfield County, Wisconsin.

Geoffrey Chaucer’s Canterbury Tales includes an account given by the Pardoner concerning three blasphemous revelers who, outraged by Death’s carrying off so many of their friends, set out to kill Death. An old man they come upon in their inebriated sally, threatened by the trio, tells them that he saw Death most recently under a large oak tree that he points out to them in the distance. The three dash off there, only to find eight bushels of gold coins. Nothing obviously threatening, nothing resembling Death — just a means to unlimited, illiberal revelry. The gold is their undoing, however, for they see it as a means to extend their life of revelry and dissipation, and they murder each other before the day is through trying to maximize the untoward benison each for himself.

The tale is not unique. There are other medieval equivalents. Perhaps it occurs in other cultures as well. The tale is fabulous, in the Aesopian sense, for it first disguises, then reveals, a moral — a particularly biting moral in this case. The revelers’ motives are crude — initially irrational vengeance, then greed, avarice, and envy — and muddled by drink and debauchery. The reader, however, both sympathizes with them and knows that their task is impossible to accomplish, and he patiently waits for the consequences to unfold.

Perhaps every age at least since Francis Bacon laid the groundwork for the scientific method (or even earlier, when Christopher Marlowe wrote Doctor Faustus) has been filled with ideological schemes, some tentative and anticipatory, some apodictic and imminent, to “kill death,” or at least approximate that end. Though the motives of some modern ideologists might be higher than those of Chaucer’s revelers, and their stupor less inebriate, their ends tend to be equally utopian, and the means they propose are the same simple force proposed by the tavern trio — though operating through more sophisticated technology.

Lord Bacon is reputed to have written that we who live this side of his “New Organon” of science must, if we are to ameliorate the human condition and restore man to his position of supremacy over nature, “put nature to the torture and make her tell us all her secrets.” Bacon might possibly have thought that the application of this beastly ideology would, of necessity, be restricted to physical scientists or philosophers. But the revolutionary democratic times that lay almost two centuries ahead of him would extend implementation to the “social sciences” as well, culminating in the appearance of “scientific socialism” — that is, Marxist communism. And with this extension went the privilege, indeed the duty, of forcing nature, even human nature, to tell all her secrets.

The novelist calls characters into being and prods them forth toward a closure which, once reached, turns all that came before radiant with meaning.