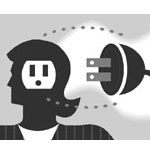 “Thoughtcrime does not entail death,” writes Winston Smith, the protagonist of George Orwell’s Nineteen Eighty-Four. “Thoughtcrime is death.” Winston knows he is a dead man, but he’s determined to stay alive as long as possible in order to connect with likeminded rebels, who he isn’t even sure exist. This one line penned in Winston’s forbidden diary captures the essence of Orwell’s Oceania, an oppressive society under a totalitarian government, technologically empowered to compel its citizens to think and act according to the dictates of English socialism, known as Ingsoc.

Above all else, Nineteen Eighty-Four is a novel about social control, a control that depends wholly on the dehumanization of the individual in order to effect a collective orthodoxy, that is, the proper way of thinking. Think of this as a Party narrative made up of a countless number of “facts,” even if patently untrue, to which all must enthusiastically assent — even when presented with evidence to the contrary — and not simply in word and deed, but, most importantly, in thought. Because those “facts” are fluid and may change from week to week, and even from day to day, the individual must be willing to accept that narrative at any given point in time, even if it happens to contradict previously held beliefs promoted by Big Brother, the idol of the people and face of Party authoritarianism. The citizens of Oceania must not only jettison the principle of noncontradiction but actually convince themselves there is no contradiction and never was, a principle known in the novel as “doublethink.” Those who even entertain a thought contrary to any jot or tittle of Oceanian orthodoxy are guilty of “thoughtcrime,” an unconscionable offense against the common good, one that is accorded an insufferable punishment beyond Winston’s wildest imagination. The net result: a citizenry not only stripped of human freedom and basic human rights but so dehumanized that each individual lacks any semblance of human dignity. (Perhaps this is why Orwell’s 1949 novel resonates so well today, especially given world events over the past year.)

Not surprisingly, this control is effected by a pervasive fear that paralyzes the individual from straying from the Party narrative and its expectations. Oceania is purposefully in a state of permanent stalemate war. Bombs drop indiscriminately on London 20 to 30 times a week, killing citizens almost daily. The overwhelming implication is that these bombings are orchestrated by Oceania itself in order to keep its citizens in a perpetual state of fear and promote a blind patriotism to a government they are convinced will keep them safe. Not only are Oceania’s citizens united against a common foreign enemy, more importantly, they are united against a common domestic threat known as “The Brotherhood,” an invented shadow organization of saboteurs headed by the fictitious revolutionary Emmanuel Goldstein. (Think of today’s cries of “domestic terrorism” in our own world.) Party members, as part of their daily work routine, are expected to enthusiastically vilify Goldstein, the Brotherhood, and whichever superstate Oceania is currently at war with — according to the propaganda of the day, churned out unceasingly by the state-run news media. With all that time spent channeling hate, few find time to consider the authenticity of any of the Party’s claims.

We live in an era of decadence, a fatal decline if we fail to defeat the most dangerous enemy of the West: communism and all its lies.

Here Catholics can discover a Church tougher and more unashamed than their own, and perhaps can learn how to persevere against a cultural elite that despises them.