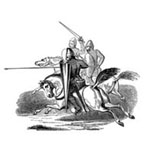 By Kenneth Colston | November 2012
Kenneth Colston is a retired teacher of languages who has contributed many articles to newspapers, magazines, and journals since 1984. He resides in St. Louis.

If you take a class on or read an article about the Spanish language’s greatest writer, Miguel de Cervantes Saavedra, chances are you’d never learn that the Spanish Shakespeare was a faithful, even zealous, Roman Catholic. If his religion is ever mentioned, it is usually explained away as a pose or a mask or even a false face to hide his true beliefs from a persecuting totalitarian regime. In this modern view, those true beliefs, which can be read in between the lines of Cervan­tes’s art, reveal a rebel highly critical of the Spanish Counter-Reformation establishment who was in fact a precursor of modern pluralism, someone you would want on the faculty of an Ivy League comparative-literature department. Indeed, it is presumed, in his heart of hearts he was probably an agnostic and maybe even an atheist, but of course if he had been candid about his lack of faith he would have faced either execution or exile like the Jews or Moors of Ferdinand’s Spain of 1492 or Phillip III’s of 1608.

I recently participated in a National Endowment for the Humanities Summer Seminar for School Teachers on Cervantes’s masterpiece, Don Quixote. It was delightful to sit at a table and simply read a classic text with high-school teachers and college professors from all over the country. I was appalled, however, by the ruling assumptions about Catholicism, and about Cervantes, held by nearly everyone in the room, including several practicing Catholics. Cervantes’s criticisms of the Church, it was understood, meant that he was “opposed to all organized religion.” The “Catholics” of his time were the people who persecuted and exiled Spain’s Jewish and Moorish minorities, indexed and burned progressive and scientific books, executed heretics, and kept women on constant house arrest. The sole purpose of the Holy Office was to torture innocent freethinkers, not to save souls and order the commonwealth. The usual Jacobin prejudices against Christian thought were trotted out — that it is irrational, mired in superstition, opposed to progress and science; that it is inhumane, hypocritical, intolerant, and generally out of step with enlightened contemporary academic research. Cervantes’s Gospel leanings were turned against the Church herself: That he and his hero showed sympathy for the poor, women, prisoners, writers, and Moors was considered a statement against the Church hierarchy, not a dramatic rendering of the corporal and spiritual works of mercy. In any case, nothing could really be said for sure about Cervantes’s thought because he was a master of disguises, everywhere and nowhere in his text, like an underground writer during the Soviet period.

Given the secular nature of the modern academy, this anachronistic reading is not surprising, despite the fact that Spanish culture has been traditionally and robustly Roman Catholic. All manner of critical approaches to Cervantes, from feminist to deconstructionist to Freudian to reader-response, appear in publications about him, save the one most consistent with his time, place, and person: The one that asserts that the substantially documented biographical facts of his life do establish that he was a practicing and — during the period of his floreat — an ardent Roman Catholic, and that therefore the reader is entitled to presume that the Catholic faith in his pages was sincerely even if not uncritically held by the man who actually wrote them. And if one reads his works, one can see that the “oppressive” religious authorities of his time gave the artist at least as much latitude as, say, today’s secular media elites give men and women of faith who dare to speak in the public square.

Cervantes was born into a devout Catholic family. He was baptized on October 9, 1547, under the patronage of St. Michael, the archangelic protector of Christen­dom against the wiles of Satan. Nomen omen est, as the Romans liked to say: Your name is your fate. And so his parents’ choice of St. Michael suggests a lively faith present in the family. His sister Luisa became a Carmelite prioress. His maternal grandmother’s family may have been conversos, Jews pressured into converting to Catholicism, but convert ancestry can increase devotional conformity as much as make it suspect. (The circumstantial evidence that they were con­versos is that they practiced medicine and commerce, converso occupations, in converso locations. For some reason, secular historians seem to assume the worst about the conver­sos, that their conversions were forced or insincere, which, of course, some may have been, but assuming that a priori says more about con­temporary cynicism than it does about early-modern attitudes.) In any case, Cervantes had his Old Christian roots officially confirmed later in life, which may suggest his own or his age’s prejudices against conversos. Confirming Old Christian roots, however, can itself be seen as an act of public conversion, of announcing that one would live under the banner of Christ, and it was an optional act of devotion — a second baptism or confirmation, as it were, or a renewal of one’s wedding or priestly vows. Furthermore, he and his other two sisters later in life became lay novitiates in the Trinitarian Order. His brother Rodrigo fought alongside him in the mighty battle between the Turks and the Holy League, led by Spain, Venice, and the Papal States, at the Battle of Lepanto. While we may question whether his parents looked with pride on their devoted offspring (the children were not without scandab| they had raised loyal children of the Church.