Volume > Issue > Freedom, But to What End? 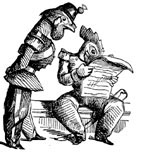 “Jesus hearing this, saith to them: They that are well have no need of a physician, but they that are sick. For I came not to call the just, but sinners.” — Mark 2:17

Why do people still believe in the Gospel? True, most “educated” people consider the idea of faith an anachronism in our age of technology and pluralism, but a few remain undaunted. They may even run in the same professional circles; there are doctors, lawyers, accountants, engineers, and even scientists who still believe. How does the Church attract adherents in the face of indifference? There are as many answers to this question as there are individual professions of faith. Speaking anecdotally and projecting accordingly, one theme that drives Christians’ continued adherence is the ubiquity of suffering. Suffering takes on many forms and has many causes. We suffer physically from sickness. We suffer emotionally and psychologically from the sins of others. We suffer similarly from our own sins. We suffer from the separation of loved ones — either circumstantially in this world or eternally in death. The one constant is that every human being — as if it were the sine qua non of humanness — suffers at some point in his life and often inconsolably.

Suffering is often put forward as a “proof” against God since a loving God would not permit good people to suffer. I always viewed that line of reasoning as an empty canard against the divine: Instead of acting as a “proof” against God, human suffering, in all its varied forms, is the one phenomenon that awakens people from the dream that we are somehow in control of our lives. In our impotence, the eyes of our heart open to our need for divine assistance. In that lonely place, the power and glory of Jesus Christ can become overwhelming. Far from beaten, the prospect of faith remains because man as man will continue to suffer.

As one of those minoritarian “educated” believers, I find it impossible to imagine living in this world without faith. I find it impossible to reconcile my own failings, the failings of others, and the seeming senselessness of suffering without both the warm embrace of my loving God and trust in His overall architecture of the universe. I never found the veracity of Christianity in the proofs for God. I believe them and cherish that God may be known rationally, but that is not why I cast my lot with the Nazarene. No, I looked in the mirror and knew that I was a deeply flawed man, and therein lay my proof. I knew, as if by gift or inspiration, that I was broken in ways I could not fully understand.

Over the years, I met others who confided in me their membership in this fraternity of failure and I knew I was not alone in my incompleteness. The fact that the world “out there” seemed full of suffering and misery of every kind was not surprising when, in the depths of my soul, I had a cup full of suffering from my own failures and, more importantly, my inability to change. Thus, when I heard the Gospel for the first time, when I saw that the whole of my life — the whole of every life — cried out for a savior, cried out Abba, I knew He is true. In a way that no other idea or explanation or person ever did, Jesus Christ and His Good News redeemed my broken existence. It is in this way that Jesus Christ is Truth. In my weakness and failures, I found Him who saves, and I was gifted with certainty that every other way is a cheap imitation.