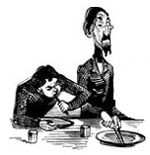 By F. Douglas Kneibert | June 2013
F. Douglas Kneibert, a retired newspaper editor and a convert from Protestantism, is a former vice chairman of the board of directors of the Vitae Foundation, which uses the mass media to promote a culture of life.

It is an interesting bit of literary trivia that the two finest Catholic novels of the twentieth century were written by Englishmen, both of whom were converts to the faith, and that the books were published within five years of each other. The first is Graham Greene’s The Power and the Glory (1940); the second is Evelyn Waugh’s Brideshead Revisited (1945).

But what, we might well ask, constitutes a “Catholic” novel? For some critics, the answer is very broad, not to mention highly subjective, as in the case of Flannery O’Connor, in whose fiction all sorts of Catholic allusions are said to be lurking. Other critics require more substantial evidence. I would be hesitant to confer the title of “Catholic” on a book unless it contains at least one identifiable Catholic character and deals in some demonstrable way with an important aspect of the faith. Greene’s novel more than meets those standards.

The Power and the Glory grew out of a trip he made to Mexico in 1937-1938, primarily to gather material on the horrific effects of the socialist government’s persecution of the Catholic Church. Greene reported what he saw and heard of the widespread suffering, which he combined in the context of a highly atypical travel book, The Lawless Roads.

That a novel would grow out of this experience was the last thing Greene said he had in mind. But he soon realized that what he had learned in Mexico far transcended a mere travel book, even one as unusual as The Lawless Roads.

Man’s efforts are lost if they are not embedded in and do not proceed from the eternal perspective, without which they remain fragmented impulses.

The narrator of the new translation —…