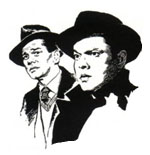 By John Martin | May 2011
John Martin is a veteran professional writer whose career includes stints as a Charlotte Observer bureau chief, a Business Week copy editor, and chief speechwriter for New York State Comptroller Ned Regan. His published books include the novel A Leopard at Maytime (Double-day), Roses, Fountains and Gold: The Virgin Mary in History, Art, and Apparition (Ignatius Press), and the sportive The Cat on the Catamaran (Zossima Press). His poems and essays have appeared in Chronicles, The Rem­nant, First Things, The Sewanee Review, The Christian Century, and The Chesterton Review. His produced plays include A Chosen Vessel: An Evening With St. Paul, which has been performed more than four hundred times here and abroad; The Troll Palace and Mac­death, both mystery thrillers; and the St. Francis musical Troubadour, for which he wrote book and lyrics.

Ed. Note: This installment of the Vital Works series takes a step in a new direction: into the realm of motion pictures. Film has proven to be an enduring art form, and certain motion pictures have legitimately attained to the status of “classics” — not necessarily due to their age but to the excellence they achieved in writing, acting, and directing. A select number of these classics have something significant to say to us in our time and are thus worthy of a fresh retrospective. In the following article, John Martin looks at why The Third Man (1949) is so deserving.

It’s perhaps the most unforgettable moment in the film noir classic The Third Man. High in the Rie­­senrad, the great Ferris wheel at Vienna’s Prater, Harry Lime (played by Orson Welles) and Holly Martins (played by Joseph Cotten) face off in a seedy 1949 parallel to that epic mountaintop temptation when the Devil, for a price, offered Christ all the kingdoms of the world. To be sure, Lime’s offer is only a job in his diluted-penicillin racket and not the world’s thrones and gold; and Martins, though a man of principle, is hardly a Christ-figure. Yet the echoes of that cosmic bribe attempt not only resound as throbbingly as Anton Karas’s zither music on the soundtrack, they vibrate all the way into what was once the distant future — the Third Millennium, where you and I now ride the wheel and wonder if somewhere before we haven’t seen that grinning man in the black hat:

HARRY: Victims? Don’t be melodramatic. Look down there. (He points through the window at people moving like black flies at the base of the Ferris wheel.) Would you really feel any pity if one of those dots stopped moving forever? If I said you can have twenty thousand pounds for every dot that stops, would you really, old man, tell me to keep my money — or would you calculate how many dots you could afford to spare? Free of income tax, old man, free of income tax. It’s the only way to save nowadays!

In Harry Lime, screenwriter Graham Greene has given us a Lucifer who is not only at home in the post-World War II black-market Vienna, but who seems even better suited to our even more merciless and cynical world of 2011, with its ever greater variety of “dots.” The dots may be preborn infants, frozen embryos, Terri Schiavo, vast African populations, or an endless parade of other hapless victims — but the rulers of the darkness of this world are not about to spare them. Oh yes, Harry Lime is alive and well and counting dots all over the globe at this very moment.

Black Comedy at Its Best

John Huston’s film career, which has spanned more than 50 years, has been a curious blend of the sublime and, if not the ridiculous, the striking­ly mediocre.