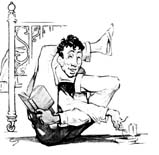 We have been made to wait, and so we wait.

When Archbishop Carlo Maria Viganò released his “testimony” regarding the Pope’s alleged complicity in the cover-up of Theodore Cardinal McCarrick’s serial sexual predations, Francis told the gathered reporters aboard the papal plane, “When some time passes…I may speak.” That was in late August. Over two months have passed; still Francis has not spoken. (For details on the whole affair, see last month’s column, “At Last, a Reckoning?”)

It comes as no surprise that Francis has kept everybody in suspense. After all, we’ve been waiting over two years for him to respond to the dubia, a set of five questions from four cardinals about ambiguous passages in his apostolic exhortation Amoris Laetitia (about which see our New Oxford Note “A ‘Climate of Fear’ in the Vatican?” Jan.-Feb. 2017). Francis even refused the cardinals a papal audience.

Some have argued that the Holy Father hasn’t exactly been silent about Viganò’s testimony, much as it was argued that he wasn’t exactly silent about the dubia. When he railed against clerical “victims of careerism and opportunism” during his 2016 Christmas address to the curia, many interpreted that as an oblique reference to the dubia cardinals. Francis accused these unnamed opportunistic careerists of having “hardened hearts” and “misguided minds,” of “hiding behind words of self-justification and often accusation.” Hmm, to whom could he have been referring?

Not a month after saying he “may speak” about Viganò’s testimony, Francis could be heard hinting — allegedly! — that Viganò has taken part in a demonic plot. Yes, you read that right. “In these times,” Francis said in a homily during Mass at his Casa Santa Marta residence (Sept. 11), “it seems like the Great Accuser has been unchained and is attacking bishops…. He tries to uncover the sins, so they are visible in order to scandalize the people.”

On the question of how to accommodate second marriages in the Church, most of the key players in the debate, for now, happen to be German bishops and cardinals.

America magazine blames the scandals on "a repressive clerical culture."