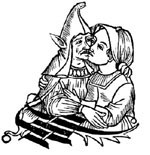 By Joshua Hren | November 2018
Joshua Hren is Assistant Director of the Honors College at Belmont Abbey. A longtime managing editor of Dappled Things: A Quarterly of Ideas, Art, and Faith and editor-in-chief of Wiseblood Books, he is the author of a collection of short stories, This Our Exile (Angelico Press), and the forthcoming academic book Middle-earth and the Return of the Common Good: J.R.R. Tolkien and Political Philosophy (Cascade Books).

One of the surest ways to cover up corruption is to discolor the character and motives of the one who testifies against it. In Dante’s Inferno, we find the following sign affixed to the Gate of Hell: “SACRED JUSTICE MOVED MY ARCHITECT / I WAS RAISED HERE BY DIVINE OMNIPOTENCE / PRIMORDIAL LOVE AND ULTIMATE INTELLECT.” Considering this passage, Nietzsche quipped that Dante “committed a crude blunder when, with a terror-inspiring ingenuity,” he insisted that love created Hell. Nietzsche contended that “the slave revolt in morality begins when ressentiment [resentment] itself becomes creative and gives birth to values: the ressentiment of natures that are denied the true reaction, that of deeds, and compensate themselves with an imaginary revenge” (On the Genealogy of Morality: A Polemic, 1887). For Nietzsche, Dante’s daring contention that love created Hell perfectly betrays the “fact” that the Christian’s lofty language of love is merely a mask for the seething hatred that stirs his soul.

Spectating Hell, the weak — those who suffered injustice, whose abusers slipped through the scaffolding of earthly justice — find the ultimate fulfillment of their urge to avenge: the eternal punishment of those at whose hands they suffered. Accordingly, Dante’s Inferno is nothing more than a catalogue of his hatreds, an incarnation of his vindictive judgments. Accordingly, those who testify to the networks of organized sin within the Church, who testify to the cover-up of unnatural vices by a chain of clerical secrecy that links the humble parish priest to the Servant of Servants — these accusers are nothing more than revenge-seeking reactionaries ruled by ressentiment.

The figure whose condemnation most reverberates throughout the Divine Comedy is Pope Boniface VIII, who deviously procured the abdication of Pope Celestine V (the abdication prior to Benedict XVI’s) and whose connections and cunning won him the papal throne. We meet Boniface many times in Dante’s poem. In the Inferno, Pope Nicholas, upside down in an inverted baptismal font, mistakes Dante for the schemer and asks, “Are you there already, Boniface?” — implicating Boniface in the sin of simony, the buying and selling of Church offices. Later, in the lair of evil counselors, we learn that the lost shepherd “brought [a soul] back to all [his] earlier sins.” “May he rot in Hell!” the misled soul proclaims.

In the Paradiso, the saints who inhabit the eighth Heaven blush at Boniface’s wickedness, and even from the very peak of the Empyrean, Beatrice critiques the crooked heir of Peter’s throne.

The truly human needs are the very things not absolutely necessary for mere survival: dignity, respect, gratitude, and kindness.

The Catholic Bishops & the Crisis of 2002

One function of the Catholic bishop is to insist upon the doctrinal integrity of the whole of the Church's teaching. Today's bishops have too often forgotten this.