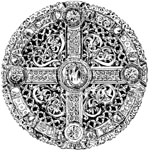 By Janet Grayson | July/August 1995
Janet Grayson is a professor of English at Keene State College in New Hampshire.

Does anyone read Robert Hugh Benson anymore? He has been dead since 1914. Incredibly, his star, like a comet hurtling across the sky drawing all eyes to it, passed out of mind almost as rapidly as out of sight, though in his time allotted, in its moment of glory, the flame leaped with such intensity that it seemed all but inextinguishable. Such a flimsy thing is worldly fame. It may be that 80 years after his death, Benson admirers are still to be found here and there among Catholic readers exposed as youngsters to his “sentimental” novels (an opprobrium applied after his death) or, less likely, his apologetics ringing with vivid metaphors. While he lived, from first novel to last, he enjoyed an immense audience, an international audience drawn from all classes (including the royal family) across several continents. His admirers were not satisfied with a novel a year, or even two. It was rumored by those who did not like him that so smoothly oiled was his creative machinery that he had contracted with publishers to crank out three a year. Sic transit gloria.

He was indefatigable. He wrote with incredible speed and intensity, for that was how the creative spirit moved him — to set himself furiously to the task to write and write until the thing was done and then to collapse into a week of sleep. It is true he was often careless and seldom revised, and thus left himself wide open to criticism, some of it deserved, some cynical. But his public remained faithful, rapt in Bensonmania, and seemed not to mind the faults big and little, satisfied that yet another opus was waiting to be savored. That appetite for Benson books was unabating. In 1915 his uncollected poems were edited; and there was one more novel yet to see the light of day posthumously, for a grand total of 20 novels published within 10 or 11 years. In addition to his novels (he insisted that the novels stand apart from his “works”), children’s books, plays, and poetry, there were books put together from articles, lectures, and sermons. At the same time he was writing prefaces and introductions to the works of others and keeping up a voluminous correspondence. As a speaker, he drew enormous crowds and was much sought after in England, and in America as well; at the time of his death his engagement book was packed for several years to come.

He was besides this, and above all, a Roman Catholic priest.

His official biographer, C.C. Martindale, also a convert from the Church of England and a priest, commissioned to write the massive two-volume authorized biography (perhaps unprecedented homage to a man who died at the early age of 43), had met him, did not like him, and liked him even less as the work developed, yet managed the task honorably, to the satisfaction of Fr. Benson’s family, his friends, and the untold numbers of faithful admirers clamoring for yet one more memorial to the beloved priest so suddenly taken. It was just that, the suddenness of his death, cut off at half a lifetime — and what a life it had been! — that was improbable and unacceptable. They would not let him go. The shock to the public nerves may be likened to sudden withdrawal from a powerful dependency. RHB was simply there, a part of English life, ever writing, ever preaching. Open a newspaper, and the announcement of a sermon at the Carmelite Church in Kensington or at Westminster Cathedral or away in Salford or Liverpool or Edinburgh jumped out of the page; pick up a monthly or a quarterly and there was a Benson book or lecture reviewed, or an article by him on any number of subjects, from spiritualism to German war atrocities in Belgium to miracles to Christian Science. He was ubiquitous, a part of the landscape, a celebrity in high vogue, with more ink spilled over him than over any other English priest or bishop, Church of Rome or Church of England. That such a familiar presence was cut away so suddenly was an affront to the order of things, like losing a favorite brother or finding a valued finger suddenly lopped off. So the panegyrics poured forth in a stream of articles and books and poems and letters, and from pulpits. The public could not get their fill of Robert Hugh Benson, dead or alive, to the extent that finally the British Weekly clamored above its banner, in bold letters, for a halt to what they surely considered profane worship: “No More Hugh Benson!”

The greater the wound the longer the convalescence, but the public recovered, and before long, deprived of his personal magnetism, cut off from his stunning sermons and without the benefits of a sympathetic press to keep Bensonmania alive, the public let go at last and he was allowed to rest.

Swift’s struldbrugs inspire consideration of the abiding human passion to prolong life indefinitely. But by losing our mortality, do we also lose our humanity?

According to Pope Leo XIII, Anglican Orders are "absolutely null and utterly void." That makes the Anglo-Catholic "Eucharist" invalid, too.