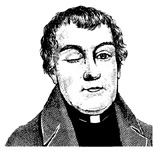 By Michael S. Rose | January 2005
Michael S. Rose is the author of five books including The New York Times bestseller Goodbye, Good Men. He is Web Editor of the New Oxford Review.

A former Catholic seminarian is suing the Diocese of Tucson, Ariz., its bishops, and Bishop Wilton Gregory, the President of the U.S. Conference of Catholic Bishops (as of this writing), among other high-ranking American prelates. The suit alleges a pattern of racketeering activity exemplified by fraud, conspiracy, and obstruction of justice.

Attorney Ivan Abrams filed the case under provisions of federal RICO (Racketeering Influence and Corrupt Organizations) statutes. The federal RICO law is a set of statutes that was initially directed at shutting down organized crime. Over the past two years, however, RICO has been used by some plaintiffs who argue that the Church cover-up of the clergy sex abuse crisis falls under RICO’s provisions.

Philip A. Hower was studying at the Pontifical College Josephinum in Columbus, Ohio, when he was ousted from the Diocese of Harrisburg, Penn., by now-Cardinal William Keeler of Baltimore. Hower claims he was essentially “fired” and later blackballed from ordination in other dioceses because he “blew the whistle” on the homosexual activities of priests with whom he resided as a priest candidate.

According to the federal lawsuit, filed in Tucson, Hower had satisfactorily fulfilled all seminary requirements to be ordained a transitional deacon, the final step on the path to ordination to the Catholic priesthood. In the summer of 1985, prior to completion of his Master of Divinity degree, Keeler assigned Hower to a parish in Selinsgrove, Penn., to complete his required pastoral internship under the supervision of Fr. John G. Allen.

Although the seminarian resided with Allen at the parish, Hower claims he was ordered by the Pastor to vacate the rectory on a regular basis. It wasn’t long before Hower discovered the reason why. He said he learned from the parish deacon and several parishioners that Fr. Allen was involved in homosexual relationships with several young men who would come to visit him from the local college.

An Update on Fr. Timothy Radcliffe

The former Dominican Master General says Catholics need to stretch their minds by reading gay novels, having gay friends and listening to them.