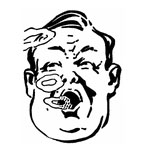 Of debates about right and wrong, there is no end. Not so with our decisions, and not to decide is to decide. Each of us — when it is time to act — ought to act on conscience. But a pair of questions immediately arises. What is conscience? Why is it authoritative?

If we don’t address these questions, we’ll soon be in deep water. That was the fate of Mark Twain’s Huckleberry Finn. While rafting down the Mississippi, he sheltered the runaway slave Jim. Huck himself says that he was acting against his conscience. Still, he couldn’t betray Jim. Huck tries to dodge his dilemma. “What’s the use you learning to do right when it’s troublesome to do right and ain’t no trouble to do wrong, and wages is just the same?” (Either way, he’d “feel bad.”) Stumped, Huck says, “I reckoned I wouldn’t bother no more about it, but after this always do whichever come handiest at the time.”

Moving from fiction to fact, many and various administrative bodies today address the questions at hand and answer them wrongly. Consider the hospital that provides “full service” to patients. Doesn’t it have a duty to do so? But perhaps a physician or nurse claims that to assist in abortion is a violation of conscience. Suppose the relevant administrative body understands conscience as, say, a strong conviction, the violation of which damages one’s self-esteem. On this view of conscience, the commitment of the hospital to perform abortions might seem to take priority over individual conviction and self-esteem. Perhaps, too, the objector should reconsider the very decision to be a medical professional. But so brisk and convenient an analysis begs the questions of both what conscience really is and what follows about its authority.

Hendrik Stoker’s Conscience: Phenomena and Theories offers a searching discussion of both of these questions. Stoker (1899-1993), a Calvinist, sifts and sorts the views of major figures like Kant, Hegel, Darwin, Nietzsche, and Freud. And he does so by engaging major Calvinist figures such as Herman Dooyeweerd, Abraham Kuyper, and Herman Bavinck. Stoker, moreover, is deeply influenced by his fellow phenomenologist Max Scheler (a resource for Karol Wojtyla), and he finds much to admire in John Henry Newman.

Stoker defines conscience as “the real internal disclosure of personal evil,” whether realized, tending toward realization, or rejected. This definition puts conscience at a distance both from mere animal reactions and evolutionary accounts. Neither can bridge the abyss between biological and moral phenomena. At the same time, he distinguishes between general moral knowledge and the immediate experience of conscience.

Stoker’s definition depends on key presuppositions. The first is epistemological. For him, it is an emotional intuition that discloses personal evil, and the disclosure is compelling. “Conscience does not lie in the bloodless judgment of reason itself,” he writes, “but appears only through its attendant feelings by which it is grasped with certainty.” Conscience neither rests on argument nor is the result of inference. “It is in the ‘heart,’ not in the ‘understanding,’ that conscience…is primarily to be sought.”

Bracing as it might seem, Stocker’s epistemology faces “the conflict problem.” Suppose Adam has an emotional intuition of a personal evil that in conscience he must reject. Suppose Eve does as well. What are we to say if Adam’s evil is participating in abortion and Eve’s evil is failing to facilitate abortion? Policymakers might contend that there can be no recourse, at this point, to moral argument. They might rule that the consciences in question cancel out each other, and that democratic institutions should answer to the majority.

Stoker’s second presupposition is metaphysical. On his view, conscience is chiefly negative. It warns against personal evil. Here his implicit metaphysics faces “the reification problem.” From Augustine on, Christians have argued that evil is parasitic. However it afflicts us — much like “being warped” depends on that which is first intact — evil distorts what is good. Stoker rightly emphasizes that we experience conscience from a first-person perspective. Adam experiences his own conscience and not Eve’s. But the question remains: How can we make sense of personal evil without a more basic grasp of the good? To answer that question, we can revisit our experiences. Still, those experiences, insofar as they are personal and thus intelligible, are ordered first to what is real and second to what falsifies the real. Evil does not exist independently.

A third key presupposition of Stoker’s position is that one can grasp the character of conscience and yet remain neutral with respect to God’s existence. Stoker himself writes as a convinced theist. At the same time, he dismisses accounts of conscience that center on God’s action in the very constitution of personal conscience. Perhaps he does so because he believes that conscience is a universal phenomenon rather than a limited religious experience. Yet we need not suppose that faith somehow circumscribes God’s action. Christians have long thought of God as closer to each of us than we are to ourselves. What Augustine wrote in his Confessions, even if not recognized, is universally true: “You were more inward to me than my most inward part and higher than my highest.”

Objections aside, Stoker’s work on conscience is of enormous value, especially in its historical range and experiential focus. Yet there is an alternative to his definition of conscience, one that better meets the problems. We find the substance of that alternative in the Catechism of the Catholic Church.

First comes the epistemological point. Conscience is an exercise of practical reason — that is, reasoning about what one is to do. It engages the whole person and is anything but bloodless. As the Catechism puts it, “Conscience is a judgment of reason whereby the human person recognizes the moral quality of a concrete act that he is going to perform, is in the process of performing, or has already completed” (no. 1778). We experience conscience, yes, but we do so in acting on the basis of reasoned evaluation. Conscience is authoritative because it is our last best exercise of practical reason. To be sure, we can review our moral judgment and sometimes improve it. It follows that when we face “the conflict problem,” the responsible approach is to come together to evaluate the practical reasoning of those in conflict. In one’s personal review, self-presence — true interiority — is crucial. Together, we can try to find a new consensus. That said, there is no guarantee that we will soon resolve our conflict. Nonetheless, a majority vote in matters of conscience is moral tyranny.

Second come the metaphysical and theological points. Love is diffusive of itself, and thus Creation is good. The good is, as it were, one of the faces of being. However much evil presses against us, it is never our starting point. God is love, and, as the Catechism teaches, “Deep within his conscience man discovers a law which he has not laid upon himself but which he must obey” (no. 1776). This is so for believer and nonbeliever. To abandon this sanctuary, wherein we are alone with God, is to undercut the compelling authority of conscience.

A final note: Stoker’s treatise first saw the light of day in 1925. We are in debt to Philip E. Blosser for his superb translation. At long last it is available to English-speaking readers.

Letters to the Editor: July-August 1991

What 'Homophobia' Is and Is Not... Books Worth Reading... That Playboy Philosophy... Greed? What Greed?...

Distinctions between Baptist, Methodist, Lutheran, and Episcopalian carry less and less import to today's Protestants, as "nondenominationalism" and "none of the above" become more common responses on U.S. religion surveys.

Niebuhr was the most extraordinary of preachers — a powerfully compelling delivery, all extemporaneous. As a teacher he called upon history and politics with great ease.