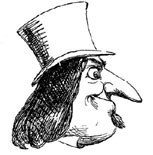 October was a momentous month on the Francis front.

First, Francis’s old friend Eugenio Scalfari was stirring things up again. The last time we heard from this nonagenarian Marxist journalist, he claimed that Francis had told him that Hell does not exist (see “Scalfari Strikes Again,” New Oxford Note, June 2018). In October, Scalfari made another outrageous assertion. The Pope, he said, had directly denied one of the fundamental tenets of Christianity.

In la Repubblica, the Italian newspaper he edits, Scalfari wrote that “anyone who has had the good fortune to meet with him and speak with him in utmost confidence — as I have done several times — knows that Pope Francis conceives of Christ as Jesus of Nazareth: a man, not an incarnate god. Once incarnate, Jesus ceases to be a god and become a man, until his death on the cross” (Oct. 9). Good heavens!

Scalfari alleges that Francis considers scriptural accounts of Christ’s prayers to the Father — specifically, His agony in the Garden of Gethsemane — to be “definite proof that Jesus of Nazareth, once he became a man, even if he was a man of exceptional virtue, was not a God.” Though Scalfari might not know it, given that he is a professed atheist, advancing this line of thought would make Francis guilty of the ancient heresy of Arianism.

The Vatican Press Office scrambled to issue a same-day statement: “The words that Dr. Eugenio Scalfari attributes in quotation marks to the Holy Father during talks with him cannot be considered a faithful account of what was actually said but represent a personal and free interpretation of what he heard, as appears completely evident from what is written today regarding the divinity of Jesus Christ” (Oct. 9).

Not exactly an ironclad denial — or an affirmation of Francis’s belief in the divinity of Christ.

The Catholic Church's sex-abuse problem is caused by predators who wear clerical collars and who are protected by a clericalist culture.