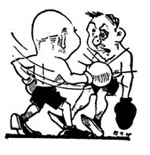 WHOSE VIEWPOINT WILL PREVAIL?

In his guest column “On ‘Politicizing’ the Eucharist” (Dec.), Fr. Regis Scanlon explains the wisdom of canon 915 of the Code of Canon Law, which reads, “Those who are excommunicated…and others who obstinately persist in manifest grave sin are not to be admitted to Holy Communion.” The argument over the canon’s application is not going to go away soon. Recent events, however, have significantly affected the prospects for applying this canon to pro-abortion politicians in the U.S.

In May 2007, as he was traveling to Brazil on his first papal trip outside Europe, Pope Benedict XVI told an inquiring reporter that he would support Mexican bishops who, with recourse to canon 915, excommunicate pro-abortion lawmakers in their country. “It is part of the code,” Benedict said. “It is based simply on the principle that the killing of an innocent human child is incompatible with going in communion with the body of Christ.”

Within hours, a reporter from The Hill, a congressional newspaper in Washington, D.C., asked Patrick Leahy, a Democratic senator from Vermont, to comment on the Pope’s statement. Leahy’s reply was blunt: “I’ve always thought that those bishops and archbishops who for decades hid pederasts and are now being protected by the Vatican should be indicted.” Leahy, a Catholic, has served as chairman of the Senate Committee on the Judiciary since January 2007, a position he holds to this day. Did his searing remark play a quiet role in a recent Vatican re-assignment?

“War must be, while we defend our lives against a destroyer who would devour all;…

During Pope Francis’s first Angelus address after ascending to the chair of Peter, he approvingly…