Volume > Issue > A Beacon in a Time of Darkness 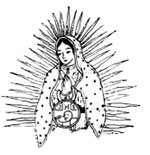 A Beacon in a Time of Darkness

By Alvaro Delgado | January-February 2017
Fr. Alvaro Delgado is Pastor of St. Edward's Catholic Church in Stockton, California, a parish that is predominantly Hispanic. He delivers a weekly pro-life message on a Spanish-speaking radio station that broadcasts out of Stockton and Modesto.

A few years ago, I made my way up a steep avenue in Sahuayo, Michoacán, Mexico, with a group of pilgrims from my parish to a sanctuary dedicated to José Luis Sánchez del Río, a teenage boy who died during the Cristero uprising in the 1920s and was canonized by Pope Francis this past October. As we climbed higher and higher, a gigantic image of this child martyr on the façade of the church came into view. Above his image stood a statue of Christ the King, hovering majestically over the skyline of Sahuayo and, symbolically, over all creation.

As we trekked farther, another image, one that was jarring and incongruent, came into view on a street crossing through the avenue. There we saw a young man, sixteen to eighteen years old, passionately kissing his girlfriend, hugging and caressing her near the top of the hill. A shiny, late model BMW was parked alongside them. Offended by this affront to the saint’s legacy, and on sacred ground no less, I said, “Don’t you have any respect for yourselves and others?” The young man sneered at me and went about his lustful business.

Did this young man and his girlfriend know of St. José Luis Sánchez del Río, or the history of the Cristero revolt? It was a time when Catholics in different parts of the country took up arms against the government of President Plutarco Elías Calles, whose atheistic regime was trying to crush the Catholic Church and destroy faith in God. Did they know that José Luis begged permission from his parents to join the Cristeros, and that he ended up paying with his life? This young man with the BMW appeared to be the stereotypical hijo de Papi, or “Daddy’s boy,” a disparaging term coined by Mexicans to describe young men whose wealthy, indulgent fathers buy them whatever is de moda (in fashion), lavishing them with fine clothes, expensive jewelry, sports cars, junkets to all-inclusive resorts, and the like.

The story of St. José Luis Sánchez del Río is one that should be shared with all teenagers, especially those of Hispanic descent, who are increasingly lured by the materialism and hedonism of America. His is a heroic tale, one I like to impart at quinceañeras, the traditional Mexican festivals in which girls celebrate their fifteenth birthday. Here in California’s Central Valley, quinceañeras invariably bring out the competitive streak in Mexican parents, with each family trying to outdo the others by putting on the gaudiest, most extravagant party, complete with a stretch limousine, live bands, and expensive wedding-style dresses and tuxedos. Typically, the young debutante is accompanied by a cohort of damas (young maids of honor, usually her best friends) and chambelanes (young male escorts of honor), outfitted as if for a royal wedding. Way too often, these young companions are religious illiterates absent from Sunday Mass, seduced by the siren call of wealth and pleasure. Some indulge in premarital sex, drugs, alcohol, and life-threatening gang activity. Against this grim, secular backdrop, the quinceañera solemnly renews her baptismal vows in the company of her parents and godparents, and she promises to follow the way of Jesus Christ, with the help of the Virgin Mary.

The Key Issue in the Middle East Conflict

The Israeli/Palestinian conflict features sharply differing perceptions of the issues and seemingly irreconcilable “solutions” to an unresolvable struggle.