Volume > Issue > Your Voice of Orthodox Catholicism, Without Any Strings Attached 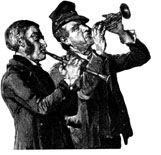 Your Voice of Orthodox Catholicism, Without Any Strings Attached

The only intellectual, theologically right-of-center, Catholic-oriented magazines that have a significantly larger paid circulation than the NOR does are Crisis and First Things. Why? Because they get their funding from neoconservative foundations. In 2003 (the last year reported), Crisis and its affiliated Morley Publishing Group got $105,000 from neocon foundations. Since Crisis‘s founding in 1982, neocon foundations have pumped in $1,774,000. In 2003 (the last year reported), First Things and its affiliated Institute on Religion and Public Life got $425,000 from neoconservative foundations. Since its founding in 1990, First Things has received a whopping $8,217,500.

Perhaps you’ve noticed that First Things is called First Things, not Last Things, as in the Four Last Things (death, Judgment, Heaven, and Helb~ Nor is First Things called Last Things First or First & Last Things. You probably thought — and we certainly thought — that the purpose of First Things and its affiliated Religion and Public Life was to instruct people about religious orthodoxy, maybe even Catholic orthodoxy. We were wrong. Their purpose is to “teach people about the moral and ethical basis of capitalism” (according to mediatransparency.org). Crisis used to be named Catholicism in Crisis. Now it’s just Crisis, with the subtitle being Politics, Culture, and the Church — note the order. One could easily get the impression that First Things and Crisis are bought and paid for by neocon foundations.

Before Crisis and First Things were even founded, the NOR was contacted by a neocon foundation — right out of the blue. The foundation wanted to give us money — “free” money. A fellow flew out from the East Coast and asked me (the Editor) to meet him for drinks in a San Francisco restaurant — on him. Sure! (We were desperate for money.)

He told me he would fund us regularly — if we would support corporate capitalism and if we would support a militaristic U.S. foreign policy. I had to think quickly on my feet. I immediately realized that our first loyalty is to Christ and His Church, not to any ideology, political party, or even any nation (for the Church is universab~ It was patently obvious that our religious mission would be compromised, that the whole idea was to make us a front group for the neocon agenda. I gave him a firm “no,” and that was the end of that.

Bush called America "the hope of all mankind" and "the light" that "shines in the darkness," in a clear allusion to John 1:4-5. The remark is very close to blasphemy.

Authority is exercised legitimately only when it employs morally licit means to attain it.

Neocon Hubris & the Battle for Ukraine

Pat Buchanan warned in 1999 about expanding NATO to include Ukraine: “By moving NATO onto Russia’s front porch, we have scheduled a 21st-century confrontation.”