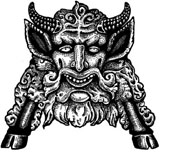 In the classic format of the Faustian bargain tale, when a mortal man makes a deal with the Devil, he seeks a well-defined, short-term personal gain — knowledge, power, authority, riches — in exchange for a long-term loss: his immortal soul. Irving’s Tom Walker, Wilde’s Dorian Gray, and Marlowe’s Doctor Faustus all follow this narrative: Walker trades his soul in exchange for being the wealthiest man in colonial Massachusetts, Gray for eternal youth and beauty, and Faustus for Mephistopheles to be at his beck and call for 24 years of conjuring.

This Faustian-style exchange is not clear, however, in Nathaniel Hawthorne’s eminent short story “Young Goodman Brown,” set in and around the Puritan village of Salem at the time of the famous witch trials. All we know is that one night, a newly married Brown kisses his wife, Faith, goodnight and carries out an errand with a “present evil purpose” in the nearby woods, the classic literary symbol of descent into darkness as well as the historical site of witchery for those accused during the Salem Witch Trials of 1692-1693. He leaves Faith at the door of their home, dressed as she is in her ostentatiously symbolic pink hair ribbons, telling himself, “After this one night I’ll cling to her skirts and follow her to heaven.” Young Goodman Brown has made an appointment to meet the Devil himself. He has arranged for a Faustian bargain of sorts, but his reason for venturing into the woods on that particular night remains ambiguous. We do know, at the outset, that he believes he can dabble with the Devil just this once and then return to Faith spiritually unscathed and continue his earthly pilgrimage with Heaven as his eternal prize. He is fondling sin for some foolish reason unbeknownst to anyone but himself and the Devil, who obligingly keeps his promised appointment.

Young Goodman Brown has a well-defined sense of good and evil. He is a Puritan, after all, and his religious community has well-defined expectations for him, expectations for citizenship, worship, and moral behavior, expectations that one does not so easily jettison. To the Puritans of Salem, the Devil is more than merely a spiritual reality; he is a physical manifestation of evil, prowling about the world seeking the ruin of souls. Brown knows this, but temptation calls to him so strongly that he is willing to leave his Faith behind for what he apparently believes can remain a spiritual one-night stand. What he thinks he has to gain is never clear, never even implied.

What we do know is that once confronted by the Devil himself “in grave and decent attire as if he is a respectable member of the town” — we later discover that the Devil has come disguised as Young Goodman Brown’s long-deceased grandfather — the young Brown has immediate misgivings. He recoils at evil, responding as a man with a well-formed conscience is wont to do. How did I get to this point, he asks himself. Why did I come? “Friend,” he says with intended resolve to the Devil, “having kept covenant by meeting thee here, it is my purpose now to return whence I came. I have scruples touching the matter.”

The Spiritual Toll of Pervasive Occultism

The problem of demonic infestation is "legion" in our culture, and priests need to respond to it with the love of Christ and the authority of the Church militant.